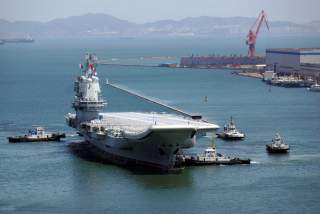 It appears that China’s first domestically designed and built aircraft carrier had plain sailing, after it cruised back home and anchored at its original construction berth at the Dalian Shipyard last Friday, with nothing off-script occurring throughout its six-day maiden sea trial.

The spick-and-span 65,000-ton Chinese flattop, so far only referred to as “Carrier Type 001A,” stretched its legs for the first time in the nearby Bohai Sea in a trial that saw its power plant and propulsion systems pounding at full steam, as suggested in a brief report by Xinhua, which claimed that test results showed that the vessel’s powertrain “reached design objectives.”

The fact that the carrier was towed out of its pier on the first day of its sea trial on May 13 – apparently with its own oil-fueled steam-turbine engine idling or switched off – and returned six days later under its own power (and on schedule upon the expiry of a six-day no-entry maritime ban promulgated beforehand by local authorities) is also evidence of its seaworthiness and that the engine and propulsion systems all performed without a glitch.

Shanghai-based Jiefang Daily said in an analysis that the new indigenous Chinese carrier first cast off at medium to low speed at the start of the trial, followed by a three-day full-throttle sail with all of the boilers operating at maximum capacity to test overall reliability.

The carrier is powered by eight four-shaft conventional steam turbines and can reportedly navigate at a top speed of 31 knots.

Tests of its propulsion system are another cardinal task, according to the article, with particular emphasis on the impermeability of the carrier’s propellers and shaft lines to water.

The Royal Navy’s HMS Queen Elizabeth, the first seagoing airbase of the United Kingdom that is in the same league of mid-sized carriers as China’s Liaoning and the new home-made vessel, encountered an embarrassing leak during its sea trial last year, reportedly caused by a faulty seal in one of its propeller shafts, leading to the ingress of 200 liters of seawater an hour. Some technicians later blamed stern glands for the incident.

So far there is no news about any major structural or technical issues found on the Chinese vessel.

Another gauge of the quality of construction and operationality of the Chinese carrier could be how long it will be moored before its second sea trial – it must be in perfect condition if the time lag turns out to be short.

And the next gazette from the Liaoning provincial maritime authority could be an indicator of the timing of further trials, with the focus shifting to the ship’s communications, navigation and electromechanical systems.

The Liaoning, a Soviet-built carcass re-purposed as China’s first aircraft carrier, had 10 sea trials between 2011 and 2012 before formal delivery, but it’s expected that its sister ship can expedite the process, thanks to the experience gained and the talent pool cultivated from operating the Liaoning.

Chinese papers note that the Liaoning’s former captain, Zhang Zheng, is now the chief commander of the new carrier’s sea trials, with numerous members of its crew drawn from the Liaoning as well.