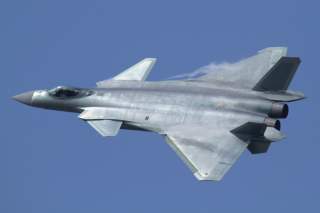 “The flight tests are being conducted as scheduled, Wu said at a press conference. The J-20 is China's fourth-generation medium and long-range fighter jet. It made its maiden flight in 2011 and was first shown to the public at the 11th Airshow China in Zhuhai, Guangdong Province, in November last year.”

In Chinese terminology, “fourth generation” corresponds to what Americans, Europeans, Russians and, indeed, the rest of the world would consider “fifth-generation” fighters like the Lockheed Martin F-22 Raptor or the F-35 Joint Strike Fighter. Similarly, “third generation” in Chinese terminology refers to aircraft such as the Sukhoi Su-30 Flanker, Shenyang J-11 Flanker or the Boeing F-15 Eagle or F/A-18 Hornet.

The entry of the J-20 into service with the PLAAF marks the first time a foreign-developed stealth fighter has been adopted by a rival great power, breaking a more than three decade American monopoly on stealth aircraft which started when the Lockheed F-117 Nighthawk attack jet became operational in October 28, 1983. However, the J-20 is not likely ready for primetime just yet and it will take sometime before it is fully ready for war.

It took the United States Air Force a long period of trial and error to adopt fifth-generation stealth fighters and learn how to most effectively employ those aircraft. Indeed, the U.S. Air Force is still learning how to fully exploit the capabilities of the F-22 in conjunction with older allied fourth-generation fighters such as the Eurofighter Typhoon and the Dassault Rafale as well as newer fifth-generation F-35s even though the Raptor has been in service for more than a decade. Meanwhile, the F-35 is only now being adopted into service after a very long and painful gestation period—with fully capable software loads only available later this year.

It is very likely that China will face a similarly steep learning curve. “The process of 5th gen fighters introduction to the U.S. Air Force was very long and painful for the U.S,” Vasily Kashin, a senior fellow at the Center for Comprehensive European and International Studies at Moscow’s Higher School of Economics—an expert on Asia—told The National Interest.

“No reason to believe China would be different.”

“They are writing how superior it [the J-20] is compared to the previous generation,” Kashin said.

The J-20 is still under development even though it has been officially adopted by the PLAAF. It will be gradually introduced into service.

“The first thing they will use it for is the Aggressor role—Blue Force they call it in China—to develop ways to counter 5th gen fighters with the currently available planes and SAMs,” Kashin said. “This allows them to make the aircraft useful before they reach IOC [initial operational capability].”

Early J-20s are thought to be powered by the Russian-made Salyut AL-31FN engines, which produces 30,200lbs of thrust in afterburner. While the Chinese hope to eventually use domestically developed Xian WS-15 engines, which are expected to produce 36,000lbs of afterburning thrust, for the time being, the jets will be built with Russian engines—the same motors as those found on the Sukhoi Su-35S.

“We have a cooperation agreement with them on the engine for this aircraft. As I understand, there will be a tech transfer,” Kashin said.

Thus, the Chinese announcement represents progress for the PLAAF in fielding the J-20, but it is not the end of the story. It’ll take some time before the J-20 is fully operational.