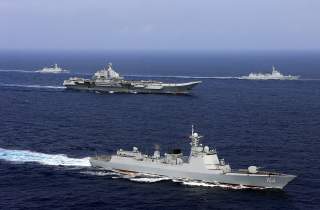 If Beijing moves to back the academics’ assertions, it could inflame already boiling tensions with smaller Southeast Asian claimants, which have opposed China’s expanding military footprint and extensive reclamation activities.

In what is likely a new bid to reinforce and even expand China’s sweeping territorial claims in the South China Sea, a group of Chinese scholars recently published a “New Map of the People’s Republic of China.”

The alleged political national map, reportedly first published in April 1951 but only “discovered” through a recent national archival investigation, could give new clarity to the precise extent of China’s official claims in the disputed waters.

Instead of dotted lines, as reflected in China’s U-shaped Nine-Dash Line claim to nearly all of the South China Sea, the newly discovered map provides a solid “continuous national boundary line and administrative region line.”

The Chinese researchers claim that through analysis of historical maps, the 1951 solid-line map “proves” beyond dispute that the “U-boundary line is the border of China’s territorial sea” in the South China Sea.

The study, edited by the Guanghua and Geosciences Club and published by SDX Joint Publishing Company, has not been formally endorsed by the Chinese government.

While supposedly found and analyzed by reputable independent scholars, there are questions on whether the “discovery” was influenced by the government considering how tightly the state controls the academy under President Xi Jinping.

Indeed, many experts believe that it’s Beijing’s latest effort to recover from a humiliating legal defeat in 2016, when an arbitration body at The Hague constituted under the United Nations Convention on the Law of the Sea (UNCLOS) struck down much of China’s claims in adjacent waters in a ruling that favored the Philippines.

Beijing rejected the verdict as “a piece of scrap paper” and “null and void” in its view. Officially, the government adopted a “three no’s” policy of non-participation (in the arbitration proceedings), non-recognition (of the legitimacy of the court), and non-compliance (with the verdict).

Yet China has since quietly readjusted the premise of its claims by providing alternative legal doctrines to the overruled Nine-Dash Line map. Last year, China began to introduce a new quasi-legal doctrine in the South China Sea.

According to the new “Four Sha” doctrine, China lays sovereign claims over the Pratas, Paracels and Spratly group of islands, as well as the Macclesfield Bank area (known in Chinese as Dongsha, Xisha, Nansha, and Zhongsha respectively).

Instead of treating them as a collection of disputed land features, each group of islands or land features is treated as an integrated archipelagic body with its own maritime boundaries, sovereign land with a corresponding title to claim an exclusive economic zone (EEZ).

The new doctrine was advanced by Chinese Ministry of Foreign Affairs officials during a closed-door meeting with US State Department officials in Washington last August, according to news reports and Pentagon sources.

The Four Sha doctrine predictably failed to gain much traction as it stood in stark contrast to modern international law, the 2016 arbitration award and the interpretation of neighboring states and international community.

The “new map” should thus be understood as yet another attempt to present old wine in a new bottle. According to the paper’s authors, the 1951 map presents “the continuous line” of a claim, which was “recognized by the international community in the corresponding historical period.”

They also claim that it provides “appropriate descriptions and drawing-methods for the sea boundary in [the] historical period,” ensuring the “certainty of the integrity, continuity and border of China’s seas.”

The academics argue that the new map should serve as the basis of China’s claims in the area, since it “more vividly, accurately, completely and scientifically” characterizes and proves Beijing’s sovereignty in adjacent waters.

The problem, however, is that there is little evidence as to the international community’s recognition of China’s claims in that era.

After all, the 1950s saw Taiwan occupying China’s seat in the United Nations, while a highly isolated Maoist mainland China waged an ideological war against the West and its smaller neighbors.

More crucially, throughout the Cold War nations negotiated throughout multiple rounds a new international doctrine to govern claims and rights in global waters, culminating in the UNCLOS.

Since then, most countries have signed up to or ratified the UNCLOS, turning it into the primary reference point for addressing maritime territorial disputes.

“In international law a map cannot be used to assert sovereignty over territory unless it is appended to a treaty,” Carlyle Thayer, a security expert, wrote in an April 24 memo.

“China’s 1951 map has no legal standing.… Discovery does not confer the right to sovereignty.” He wrote that if China adopted the map it could lead to physical confrontations between the Chinese navy and coast guard and regional states and would be an “incendiary and retrograde step.”

The arbitral tribunal at The Hague ruled specifically that China’s doctrine of “historic rights,” which serves as the basis of U-boundary claims, was “incompatible” with contemporary international law under UNCLOS.

In the tribunal’s final assessment, “there was no evidence that China had historically exercised exclusive control over the waters or their resources.”

The arbitral tribunal’s ruling, in accordance with Article 296 as well as Article 11 of Annex VII of the UNCLOS, was “final” and “binding.”

That hasn’t discouraged Beijing from forwarding alternative legal regimes to justify its de facto occupation – and attempted domination – of various disputed land features and resources in the South China Sea.

Despite the academic authors’ overzealous claims, the “new map” is unlikely to gain much international traction.

If Beijing moves to back the academics’ assertions, it could inflame already boiling tensions with smaller Southeast Asian claimants, which have opposed China’s expanding military footprint and extensive reclamation activities.

What is clearer is that China is still determined to provide quasi-legal cover for its rising domination of the South China Sea.