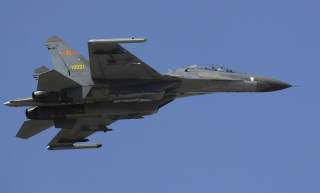 China is likely to deploy the J-11 to its artificial islands once they are completed, according to a Hong Kong newspaper.

On Sunday, the South China Morning Post reported that the People’s Liberation Army Air Force is likely to use the J-11 fighter jet to patrol the Spratly Islands, where China has undertaken a massive land reclamation project on seven reefs and rocks.

"As a long-range strike aircraft, the J-11 should be sent to the South China Sea," Huang Zhao, a former Air Force pilot, told SCMP.

Indeed, SCMP goes on to note that: “The J-11s have a range of 1,500km, which can be extended with additional fuel tanks. Setting up operations on the islands would move the reach of the air force about 1,000 km further south, and in conjunction with the Liaoning aircraft carrier, take China towards its stated goal of moving away from offshore defense to open-sea protection.”

Global Security, a defense website, has said that the J-11 “is a multi-role fighter bomber and air superiority aircraft which can also be used in the maritime strike role. The Flanker has an operational radius of around 1500 km, and is equipped with an inflight refuelling facility extending their radius by another 500 km. Although normally configured for conventional operations, the J-11 could provide China with a high-performance nuclear-capable strike aircraft.”

The J-11 is based on Russia’s Su-27. In the early 1990s, China agreed to purchase 24 of the Su-27s from the Soviet Union. Soon after the deal was signed, the Soviet Union collapsed. However, the Soviet successor state, the Russian Federation, went ahead with the deal. Later, Russia agreed to sell China additional batches of the plane, and the two entered into a co-production agreement involving the jet.

As The National Interest previously reported, in April 2015, China conducted the first flight tests of an upgraded version of the J-11, which is being called the J-11D. The J-11D reportedly incorporates the J-16’s advanced  Active Electronically Scanned Array (AESA) radar.

The new J-11D uses more composite materials and boasts more air-to-air missiles like the PL-10 and PL-15 than did earlier versions of the plane. It also has a new in-flight refueling arrangement that is similar to the J-15.

Many Western media outlets reported the statement as a change in China’s policy. Speaking at a conference at the Center for the National Interest last Thursday, Mira Rapp-Hooper, the director of the Asia Maritime Transparency Initiative (AMTI) at the Center for Strategic and International Studies, disputed this interpretation. According to Rapp-Hooper, the announcement at most reflected a change in messaging, not policy.

Today’s announcement does not break new ground with respect to China’s activities or overall position, but it likely reflects subtle diplomatic messaging as senior figures from both the United States and China prepare for high-level meetings. Beijing has already finished its land reclamation activities at some locations in the Spratly Islands, including Johnson South and Fiery Cross Reefs. At other locations, it is putting minor finishing touches on its reclamation work. At two features, Mischief and Subi Reefs, land reclamation is still very much under way. If China were to halt reclamation activity at Mischief and Subi, this would constitute a major change in policy, but this recent announcement appears only to confirm what analysts already knew: Beijing has almost finished its planned land reclamation activities in the Spratlys.

With the reclamation efforts almost complete, Rapp-Hooper said that China will likely move to the militarization phase of the artificial island project. Indeed, as SCMP noted in its report, China is already building two airstrips on the man-made islands, at least one of which is capable of supporting the J-11.

“The new structures include two airstrips, at least one of which appears suitable for military use. Located on Fiery Cross Reef, the runway extends for 3km - long enough for the J-11 to land,” the report stated.

All that being said, the J-11 itself is probably incapable of tangling with America’s most advanced aircraft, like the F-22. The plane’s deployment to the Spratlys could be a prelude to China establishing an Air Defense Identification Zone (ADIZ) in the South China Sea, however, as it would enhance Beijing’s ability to patrol the airspace in the region.