China's Next Super Weapon: Is Beijing Developing Its Own Su-34 Fullback? 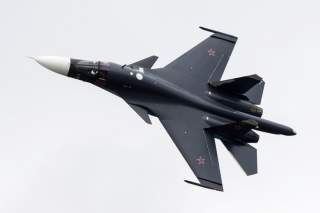 China appears to have started testing a new “indigenous” combat aircraft derived from the Russian Sukhoi Su-27 Flanker family. The aircraft would be the latest in a series of Chinese fighters that are unlicensed copies of Russian jets.

If a photo—posted on the Chinese internet site Weibo yesterday—is genuine, the new Chinese aircraft appears to be similar in concept to the Sukhoi Su-34 Fullback. It appears to have a similar duckbill radome and side-by-side cockpit seating. However, the Chinese jet has much larger, broader canards that blend in with the aircraft’s wings. It also has a large sting that looks similar to the Su-34’s.

Russia is not thought to have sold the Fullback bomber variant of the Flanker to any other nation. Nor does the Chinese version of the aircraft appear to be a direct copy of the Su-34 or its earlier Su-32 predecessor. Rather, the new aircraft—while it is clearly a Su-27 derivative—appears to be a parallel development inspired by the Fullback.

It is possible that the Chinese modified the Su-27 independently based on what they knew about the Su-34. But it is also possible that the Chinese either gleaned the technology through espionage or via a third party. In previous years, the Chinese acquired a prototype of the Su-33 carrier-based version of the Flanker from which they derived the J-15 naval strike fighter that flies off the carrier Liaoning.

Nothing is known about the aircraft’s avionics or powerplant—but presumably operational versions of the jet will be equipped with some form of electronically scanned array radar, infrared search and track and electro-optical targeting systems. The engines are likely from the same family as the other Chinese Flankers—likely or Lyulka AL-31Fs or Chinese-made WS-10 turbofans.