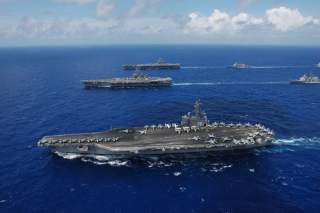 The neverending ups and downs of what is quickly becoming the hottest geostrategic flashpoint on the planet, none other than the South China Sea, was the subject of a conference at Yale University this last May. Panels were filled with world-class experts promoting their latest research (including yours truly) detailing the various claims, counterclaims and strategic challenges surrounding this important body of water. And yet, it wasn’t the heated Q&A sessions or slick powerpoints that drove debate among the attendees, but rumors of China’s latest territorial claims—a 251 dash-line that extends over almost all of the Pacific Ocean—that created the most buzz.

According to a ‘report’ on the website Elitereaders, a ‘clicky’ website that reports ‘viral’-styled news,  Beijing is now claiming Hawaii and most of Micronesia. Delegates to the conference furiously began to share the article through various social media channels. Red-faced attendees were debating the nature of such claims as soon as they scanned the article. Many wondered if this was simply a negotiating strategy on Beijing’s part, a carefully crafted ploy to make equally outrageous claims in the South China Sea look meager by comparison—claiming massive chunks of the Pacific Ocean would sort of do that.

From there, things got even more interesting. On the sidelines of the conference, a Vietnamese filmmaker was shooting a documentary on the South China Sea and asked me on camera what I thought of the claims. Without being able to do any in depth reading or fact-checking the piece, I expressed hope the report would be proven untrue, but if somehow Beijing was bold enough to make such a claim, it would only go further to cement the narrative as China becoming an international bully—taking the concept of what I referred to as ‘Mapfare’ to a whole new level.

The text of the article is interesting to say the least:

“In a move expected to escalate global tensions, China’s Ministry of Education has released a new world map in which China claims large swaths of the Pacific Ocean, including Hawaii and most of Micronesia.

According to Xinhua, the Education Ministry also issued a directive ordering “all educational facilities and government offices to replace their outdated world maps with the current iteration.”

Though the United States has yet to offer any comment, Micronesian President Manny Mori has called the map “absurd” and accused China of “cartographic rape.”

It goes on—and where it all falls apart as a poorly-timed comedic ruse:

“China’s new territory also encompasses Mexico’s Clarion Island and France’s Clipperton Island, which officials say will be allowed full autonomy. American possessions in the region, however, will be combined to form Xinmeiguo Province.

China’s new neighbors will almost certainly raise questions about the map’s legitimacy and protest the country’s expanded borders. Indeed, China’s previous “nine-dash map,” which included the contested Paracel and Spratly Islands in the South China Sea, was already a source of controversy.

But Ministry of Education officials defended the new “251-dash map” by pointing to several Qing-era documents which show the Caroline, Northern Mariana and Marshall Islands under Chinese control.

“The study of what constitutes Chinese territory is ongoing,” said one ministry official.

At press time, proof had been found that the Ming Empire once controlled a large portion of Antarctica. The Ministry of Education said it would immediately begin production of a new, revised map.”

I assumed like many of my colleagues at the conference it could very well be possible. Heck, if China has the guts to try to make a case for claims on Okinawa, why not go all in? Call it ‘mapfare’ on steroids.

But as I let the shock and horror subside and read on I realized we all had been had—thank god.

Besides the obvious hysterics like new provinces and claims over Antarctica, in just a matter of a few minutes of Googling I realized the article was not an original piece but was actually written in 2014 for a site called Ministry of Harmony. Described on its Twitter feed as “The Onion with Chinese Characteristics” it seems we had all been had—at least for a little while anyway.

Even though the map and article were someone’s attempt at a little fun, there is a larger point. China’s use of maps, passports and other mapfare-style methods of pushing a narrative of rightful territorial claims whether over Taiwan or the 9 or actually 10-dash-line in the South China Sea and others areas has been part of Beijing’s toolkit for sometime now. The fact that none of us at the conference were shocked speaks volumes to the now ingrained perception of China on the international stage as a power bent on changing the status-quo—no matter what the cost. A reputation as some sort of rogue state is a tough thing in international politics to change—and it's something Beijing should bear in mind.

Harry J. Kazianis serves as the new Director of Defense Studies at The Center for the National Interest. You can follow him on Twitter: @grecianformula.