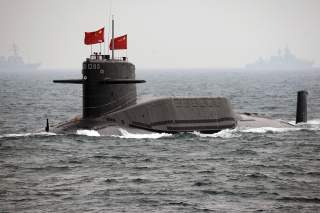 One of the most consistent aspects of China’s military policy is likely to undergo a significant transformation. Since its first nuclear test in 1964, China has maintained a relatively small nuclear arsenal designed to hold adversaries’ population centers at risk. Even as it has modernized its conventional forces to “fight and win wars” against first-class militaries like that of the United States, China’s nuclear arsenal is estimated to contain just 264 warheads, far smaller than the 1,550 strategic nuclear warheads Russia and America will each deploy under the New START Treaty, to say nothing of the nearly thirty thousand warheads they maintained during the Cold War.

This smaller arsenal is consistent with China’s different perspective about the nature of deterrence, as well as its no-first-use nuclear doctrine. At the same time, a couple of technical developments are likely to propel China to undertake a significant nuclear buildup in the coming years.

The first of these is China’s acquisition of a viable nuclear triad for the first time. For most of its history as a nuclear power, Beijing has primarily relied on single-warhead land-based ballistic missiles to deliver its nuclear weapons. After decades of false starts, however, China has now deployed a sea-based deterrent in the form of the JIN-class (Type 094) nuclear-powered ballistic-missile submarines (SSBNs). China has already commissioned four JIN-class SSBNs and will build at least another one of these vessels. Each Jin-class SSBN has twelve missile tubes and carries JL-2 submarine-launched ballistic missiles (SLBMs), which have a range of 7,500 kilometers. Some reports suggest the JL-2 can be equipped with Multiple Independently Targetable Reentry Vehicles (MIRVs) that allow each missile to carry between two and eight warheads. Thus, the five Jin-class SSBNs will require somewhere between sixty and 480 nuclear warheads. Even the low end of this estimate represents nearly one-quarter of China’s estimated warheads.

Furthermore, according to the Pentagon, China will begin fielding its next-generation SSBN, the Type 096, sometime in the coming decade, and these will be armed with the JL-3 SLBM. It’s unclear how many Type 096 SSBNs China will build, and whether the JL-3 SLBM will carry multiple warheads or not, but current reports suggest the Type 096 sub will have twenty-four launch tubes. Assuming China also builds five Type 096 subs and each JL-3 only carries one warhead, this will require 120 nuclear warheads, nearly half of China’s estimated arsenal. Including the low-end estimate of the number of warheads the Type 094 SSBN will consume, Beijing’s sea-based deterrent will account for at least 75 percent of its entire stockpile.

This is especially worrisome because China’s land-based ballistic missiles are simultaneously also requiring more warheads. As I’ve noted before, China is MIRVing its traditional land-based ballistic missiles. According to press reports, earlier this year China tested its DF-5C missile using ten MIRVed warheads. It is also believed to be MIRVing its older DF-5B, with somewhere between three and ten warheads. It’s unknown how many DF-5C missiles China possesses, but the Pentagon in the past has estimated China has around twenty DF-5A and DF-5B missiles. Assuming half of these are DF-5B, and those are equipped with three warheads apiece, and China builds ten DF-5C missiles with ten warheads a piece, this would amount to 130 warheads, or about half China’s entire arsenal. Moreover, China is also building a new, more advanced intercontinental ballistic missile (ICBMs), the DF-41, which will also be MIRVed. Indeed, Chinese state-run media have presented graphics of the DF-41 carrying ten warheads per missiles. If China were to build ten of these missiles each carrying ten warheads, that would be another hundred missiles. Together with the estimates from the DF-5B and DF-5C, this would equal 230 warheads, or 87 percent of its arsenal.

Of course, some of these numbers may be inflated. China might not build this many missiles, or might not MIRV all these missiles, and some of the extra warheads will no doubt be decoys. Still, the inescapable fact remains: technical factors will compel China to substantially increase the number of warheads in its arsenals in the years ahead.

Fissile material—the highly enriched uranium and plutonium that make up the core of a nuclear bomb—will not pose any obstacles to a buildup. Currently, Beijing is estimated to have between fourteen and eighteen tons of highly enriched uranium and 1.3–2.3 tons of weapon-grade plutonium stockpiled. This enough for anywhere between 750 and 1,600 nuclear weapons— and perhaps many more, depending on the sophistication of the design. Moreover, its expansive civilian nuclear ambitions will give it the capability to produce any additional fissile material it may need in the future. Indeed, Hui Zhang, one of the foremost experts on China’s nuclear industry, has estimated that by 2020 China will have an excess enrichment capability of three million separative work units (SWU) per year, meaning it will be able to produce around seven hundred bombs’ worth of highly enriched uranium each year without sacrificing any of its nuclear energy needs.