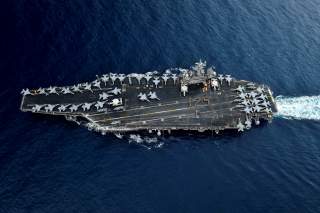 Well, it was hardly surprising when the news came out: Beijing has based – permanently, perhaps – offensive weapons on the artificial islands it has painstakingly constructed in the South China Sea. These deployments cap a series of deceptions, increasingly belligerent military actions, and various illegal activities that have surrounded Chinese goings-on in the region for nearly a decade.

In 2015, Chinese leader Xi Jinping promised not to militarize the islands that his country was – contrary to international law – building in the Spratly Islands. The Spratlys are a chain of mostly coral reefs in the eastern South China Sea that barely break the ocean’s surface, but they are adjacent both to major sea lanes of communication (SLOCs) and to potentially lucrative maritime natural resources, such as fisheries and oil and gas deposits.

Consequently, several countries in addition to China – including Brunei, Malaysia, the Philippines and Vietnam – have laid claim to various parts of the Spratlys, and nearly all have attempted to enforce these claims by establishing garrisons and other structures on the islands.

But none of these countries have gone as far as China, and it is obvious now that Xi was lying about his intentions for these artificial islands. Several islands were constructed with airstrips and harbors capable of accepting military aircraft and warships. In late 2016, China had permanently emplaced on some of these islands anti-aircraft guns and so-called “close-in weapons systems” (CIWS), basically Gatling guns connected to sensors that operate automatically against incoming air threats.

Now, earlier this month, it was discovered that China has also deployed antiship cruise missiles (ASCMs) and long-range surface-to-air missiles (SAMs) to at least three of its structures in the Spratlys – Fiery Cross Reef, Mischief Reef, and Subi Reef. The SAM systems, believed to be the HQ-9B, have a range of over 200 kilometers. Meanwhile, China’s YJ-12B ASCM is a supersonic missile with a range of nearly 300 kilometers. Both missiles could be used to close off a large portion of the eastern South China Sea to shipping and threaten other naval forces.

Both of these missile systems are, by the way, essentially copies of Russian armaments – the S-300 SAM, in the case of the HQ-9, while the YJ-12 has been described as a “lengthened version” of the Russian Kh-31 air-to-surface missile. So Moscow shares at least some responsibility for the militarization of the South China Sea.

While these militarization efforts are under way in the Spratly Islands, China is taking similar action in the western South China Sea. In particular, Beijing has greatly expanded and modernized its structures on Woody Island, one of China’s largest possessions in the South China Sea. It has lengthened its runway on the island to 2,700 meters, which can accommodate most Chinese fighter jets (in fact, Chinese Air Force J-11B fighters were spotted on the island in 2016). At the same time, Beijing has improved its harbor facilities on Woody Island, and in early 2016 it was reported that HQ-9 SAMs had also been deployed here.

Finally, China is also emplacing radar stations on many of these islands in the South China Sea and stepping up its air and naval operations in the region. These deployments, plus the stationing of missiles, effectively put all of the South China Sea within range of the Chinese military.

As a consequence, the South China Sea is being increasingly dominated militarily by China at both its eastern and western ends. This is what researchers at the US Naval War College meant when they told the author that Chinese militarization activities in the region are an attempt to create the equivalent of a “strategic strait” in the South China Sea. In other words, through the more or less permanent deployment of Chinese military power at both extreme ends of the South China Sea – Hainan and Woody Island in the west, and the new (and newly militarized) artificial islands in the east – Beijing is seeking to transform the South China Sea from an international SLOC into a Chinese-controlled waterway and a strategic chokepoint for other countries.

Creating a zone of anti-access/area denial

This amalgamation of force means that China’s decades-long “creeping assertiveness” in this particular body of water has become a full-blown offensive. What all this means is that China is well on its way toward turning the South China Sea in a zone of anti-access/area denial (A2/AD). This means keeping military competitors (particularly the US Navy) out of the region, or seriously impeding their freedom of action inside it.

The consequence of turning the South China Sea into de facto Chinese territorial waters has many implications, of course. It could severely restrict freedom of navigation and permit China to hog the economic riches of the region. In particular, it could make it more difficult (or at least more problematic) for non-Chinese navies to sail between the Indian and Pacific Oceans. It could undermine the sovereignty of many regional states; in particular, it could leave Taiwan open to military intimidation and even invasion.

Again, we outside China cannot say that we did not see it coming. China’s intent with regard to the South China Sea has been evident for years. But Beijing’s big lie has finally been laid bare.