China's Secret Landgrab (No, Not in the South China Sea) 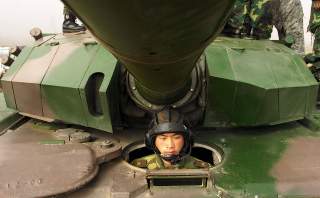 While China’s actions in the South China Sea have garnered more headlines, Beijing has quietly been pursuing another land grab in the Himalayan Mountains.

“Bite by kilometer-size bite, China is eating away at India’s Himalayan borderlands,” Brahma Chellaney, one of India’s foremost strategic thinkers, warned in a recent op-ed. “For decades, Asia’s two giants have fought a bulletless war for territory along their high-altitude border. Recently, though, China has become more assertive, underscoring the need for a new Indian containment strategy.”

Indeed, the Wall Street Journal reported in September 2014 that there was 334 Chinese transgressions across India’s border in the first half of that year. That came on the heels on 411 Chinese transgressions the year before, and 426 the year before that. These numbers have dropped off slightly in recent years, but the damage may already be done: former Indian intelligence officers estimate that China has stolen nearly two thousand square miles from India over the past few years.

As Chellaney notes, China’s strategy to acquire this land bears many similarities to its tactics in the South China Sea. First, it has civilians of different stripes—“herders, farmers, and grazers”—settle the land. Once the civilians are in place, the People’s Liberation Army comes in to provide protection. This allows them to establish a more permanent presence in the area. Once it establishes this foothold, according Chellaney, China begins “cutting off access to an adversary’s previously controlled territory and gradually surrounding it with multiple civilian and security layers.”

In other words, this is a classic salami-slicing strategy, in that no single action is aggressive enough to warrant a strong pushback, but over time, the expansion adds up. Although this is how China has maneuvered in the South China Sea, it is actually more similar to how America expanded westward on the frontier during its own rise to power. That expansion was also usually led by civilians looking to settle out west, as land in the east became increasingly scarce. By gobbling up land in the frontier, however, these American citizens came into conflict with Native Americans, and demanded protection from the United States. Although often annoyed by the settlers, who—almost certainly in contrast to China in the Himalayas—were acting on their own accord, Washington ultimately obliged, and it served U.S. grand strategy over the long run.

It is up to India to prevent China from enjoying similar success along their 2,500-mile-long border, which the countries fought a war over in 1962. In recent years, India has been bolstering its forces along the border to stop China’s land grab. Most notably, in 2013 India announced it was raising a Strike Corps to deploy along the border with China that is expected to consist of two divisions and some eighty to ninety thousand troops. The 17 Strike Corps, as India calls it, will be equipped and trained specifically to deal with the tough mountain terrain.

While the ambitions for this Strike Corps were high, actual implementation has moved slowly, as is often the case in dealing with India’s notorious military bureaucracy. The original plan was for the entire Strike Corps to be ready by the 2017–18 fiscal year. Now, only one of the divisions, 59 Infantry Division, will be fully operational by this year, according to recent Indian media articles. The formation of the second division is only just beginning, and is not expected to be ready for two or three years. It is also not at all clear if the number of troops will reach the levels initially intended. A lack of dedicated funding for the new Strike Corps also raises questions about whether the forces that do exist will be equipped with the necessary equipment to fulfil their mission. Indeed, the army can reportedly only fight a war for fifteen to twenty days, because of “crippling” ammunition shortages.

On the positive side, India has been investing in infrastructure along the border. Last month, Prime Minister Narendra Modi opened a five-mile-long bridge across a river that will expedite the movement of troops and material to the mountainous region. This is expected to be followed by a 1,200-mile highway that will cost $6 billion. There were also reports this month that India will deploy a squadron of ten weaponized Hindustan Aeronautics Limited Dhruv advanced light helicopters, which will be the first time India’s army has deployed armed helicopters to the area. Looking towards the future, Dehli is investing in new artillery, including purchasing 145 M777 Ultra Lightweight Howitzers from the United States.

All of this might not be enough to keep up with China, who has also been bolstering its forces and infrastructure along the border. Last year, Chinese state media announced that Beijing was elevating the Tibet Military Command, which is responsible for operations against India, one level above other provincial-level military commands. Furthermore, the Jamestown Foundation noted that “China has constructed roads to and along disputed areas, along with additional air bases, landing strips and logistics sites to support military deployments and operations.” Most recently it was reported that China is deploying its most advanced tank to the Sino-Indian border. In other words, India will likely to have accelerate its efforts if it wants to keep up.