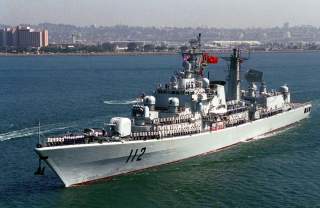 The head of one of America’s secret spy agencies recently disclosed that China is seeking to control the South China Sea through the covert development of military facilities on thousands of acres of reclaimed islands.

Robert Cardillo, director of the National Geospatial-Intelligence Agency (NGA), told a recent US congressional hearing that spy satellites and aircraft have been closely monitoring the island-building program by Beijing.

The NGA, is a little known Pentagon spy service whose motto is “Know the earth, show the way, understand the world.” It provides imagery intelligence based on spy satellites and aircraft and explains what the pictures show. The agency works closely with another spy agency, the National Reconnaissance Office, that builds and operates intelligence satellites.

One of its specialties is identifying strategic camouflage, concealment and deception designed to fool foreign intelligence services regarding covert activities — like the South China Sea island-building program.

In rare public testimony, Cardillo stated that the NGA is playing a key support role for the Pentagon’s diplomatic and military pivot to Asia that involves increased intelligence-gathering in addition to moving military forces to the region.

“We’ve embarked on activity-based intelligence, which will use the big data analytics and methodologies to find adversarial threats inside the noise and the volume of these disparate data streams,” Cardillo stated.

On the South China Sea, Cardillo said his agency is closely watching Chinese military developments there and disputed Beijing’s contention the buildup is peaceful.

Asked by a members of the Senate Select Committee on Intelligence what’s behind China’s “warlike” militarization of some of the 3,200 acres of new islands, Cardillo said one of the key questions his agency has sought to answer is what China’s intentions behind the program are.

“Part of the Chinese narrative has been that they’re commercial, even tourist-related, etc., and we have identified indications that there is more to that story,” he said.

“And the more that we’ve identified are military-related structures and equipment that at least gives the Chinese the option to permanently post military forces in and on these islands,” Cardillo said.

“So our job, obviously, is to warn about that possibility, and of course, identify it when we see it.”

Cardillo said a key question for NGA imagery analysts has been to discern the motives behind the island dredging operations that the commander of the US Pacific Command has dubbed China’s “Great Wall of Sand.”

NGA has debunked the Chinese claim that the new islands are purely commercial and concluded they are being built for future military operations.

“We’re able to use more specific and explicit capabilities to say, ‘Ah, that feature is associated with this mission set,’” he said.

“One could be safety of navigation. Think aircraft control, etc. But another [is] weapons handling, aviation fuel storage. It’s those kinds of indicators that you should count on this agency to be able to say what’s behind the development. And so we take both the geography and those indicators to create an assessment.”

Commercial imagery showing the buildup on the Paracels in the northern part of the sea and the Spratlys in the south has allowed Cardillo to discuss the more secret aspects of the Chinese island-building program, like China’s intentions behind the activities.

“We’re able to put the framework on the table that says, ‘Here are the facts on the ground. Here’s what’s happened over time. Here’s who’s being most aggressive or most provocative in the development.’ And then one can have a more informed debate about what’s the purpose behind that island.”

The NGA’s work is supporting military analysts who regard the Chinese island-building campaign over the past decade as a new form of modern warfare that uses information warfare tools, such influence, cyber attacks and deception to achieve strategic objectives.

The Pentagon’s annual report on China’s military for the first time this year published extensive NGA photographs and maps showing the Chinese military buildup in the South China Sea and other regions that were described as Chinese “low-intensity coercion.”

Over the past year, air defense missiles, anti-ship missiles and fighter aircraft have been deployed to some of the islands. China recently held large-scale military exercises in the sea with Russian naval and marine forces.

“When complete, these outposts will include harbors, communications and surveillance systems, logistics facilities, and three airfields,” the Pentagon report said. “Although artificial islands do not provide China with any additional territorial or maritime rights within the South China Sea, China will be able to use its reclaimed features as persistent civil-military bases to enhance its presence in the South China Sea significantly and enhance China’s ability to control the features and nearby maritime space.”

The testimony is an indication that an intelligence and information conflict is underway in the South China Sea between China and other states in the region, including the United States.

Image: US Department of Defense via Wikimedia