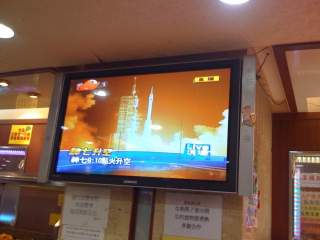 There are few areas where China is really competitive with the United States: high-speed computing, perhaps (China owns the world’s fastest computer), high-speed rail, enormous dam projects. Many of these “competitions” are mostly symbolic, but it is in outer space where Beijing is not only catching up quickly, but is on the verge of leaving the US space program – once the gold standard – in its wake.

For much of China’s defense and aerospace industry, it is easy be dismissive. Even after twenty years or so of throwing considerable manpower and money at the problem, most of what comes out of China’s armaments and aircraft factories can be considered good — some of it quite good, in fact — but in general nothing particularly exceptional.

To be sure, the weapons that China is currently producing are a vast improvement over the rubbish its factories churned out in the 1980s and 1990s. The J-10 fighter jet, the Yuan-class submarine, and the Luyang III (Type-052D) destroyer, to name but a few new Chinese-built systems, are head-and-shoulders above their predecessors. In terms of overall quality and capabilities, the People’s Liberation Army (PLA) is being gradually outfitted with weaponry that approaches that of its neighbors and likely competitors.

But most of these arms, too, are still only roughly equivalent to 1990s technology — in other words, still about 20 years, or one or two generations, behind the current state-of-the-art (to be fair, China is currently working on a variety of highly advanced weapons systems, including fifth-generation fighters and stealthy warships, but these remain developmental systems that could be years away from deployment). In addition, China’s technology base remains woefully deficient in several areas critical to armaments production and aerospace. Its jet fighters are powered by Russian engines, its destroyers employ Ukrainian turbines, and PLA maritime patrol aircraft are outfitted with British search radars.

Moreover, many so-called “Chinese” weapons are simply copies or upgrades of foreign weaponry. The J-11 fighter jet is a reverse-engineered version of the Russian Su-27, the FM-80 surface-to-air missile is based on the French Crotale (a few of which were sold to China back in the 1980s), and most Chinese-built helicopters are copies of French-supplied rotorcraft. Again, most of these designs are at least 20 years old.

There is, however, one area where the indigenous Chinese defense and aerospace really does shine, and that is its space sector. Missiles have always been one of the country’s “pockets of excellence,” going back to the Maoist period. Even while the Cultural Revolution (1966-76) basically shut down most of China’s armaments production, the imperative put on “two bombs and a satellite” – that is, developing both fission and fusion nuclear weapons and launching an artificial satellite – kept strategic rocket programs well-funded and supported in the midst of domestic political chaos.

Even so, when China decided to break into the lucrative international space-launch business in 1990, it was a tough battle. Its first space-launch vehicle (SLV), the Long March 1, was essentially a civilianized version of its Dong Feng 4 intercontinental ballistic missile. It was not a particularly reliable system, and China suffered a number of launch failures in the early 1990s, culminating in two cases (in 1995 and 1996) where the rocket quickly veered off-course and crashed or exploded, causing several deaths.

Since then, however, China has chalked up success after success (some say that this was due to the fact, after the twin launch disasters, that US aerospace firms illegally transferred technology and assistance to Beijing that helped the Chinese improve their SLVs). In any event, since 1997, China has had 183 commercial space launches with only three failures.

In terms of space launches, China has nearly matched the United States. Between 2012 and 2015, China conducted 68 successful space launches, compared to the America’s 72.

But it is in manned space, perhaps, that China really shows up the United States. While the US must rent space on the Russian Soyuz to get to the International Space Station (after retiring the Space Shuttle without replacement), China has its own spacecraft, the Shenzhou, based on the Soyuz program. Since 2003, China has launched five manned orbital missions, the last of which, in 2013, placed three taikonauts in orbit and included a space walk.

China has a very ambitious manned space program. Its last two Shenzhou missions entailed docking with the Tiangongorbiting space lab, and there are plans to orbit a small space station in the early 2020s. Beijing’s long-term goal is the put a man on the moon. In 2013, it soft-landed the Chang’e 5 rover on the moon, and a mission to bring back lunar samples could be accomplished as early as next year. A manned landing could happen by 2025.

China, in short, is giving the United States a real run for its money in outer space. The irony is that, for all its complexity, many aspects of a space program are not rocket science. To be sure, designing, building, and launching a rocket carrying a satellite or even a human, is not easy. However, the basic concepts of space launch are decades old, and the fundamental technologies are mature enough to be well within reach of most medium-sized powers, provided they have the will and the resources to do so. Building a basic SLV, for example, is nowhere near as complicated as developing a fifth-generation manned fighter jet or a modern, ultra-quiet submarine. The Shenzhou spacecraft, meanwhile, is a relatively simple design (compared to the US Space Shuttle) and is derived from the venerable, proven Soyuz.

And this is precisely the “genius” of the Chinese space program: keep it simple, and go slowly. And it is also the problem with the United States, which has always preferred cutting-edge, high-tech (and therefore incredibly complex) systems like the Space Shuttle – which, incidentally, never lived up to its goal of making space launches cheap and frequent. In the classic fable of the tortoise and the hare, China is showing that, once again, slow and steady wins the race.