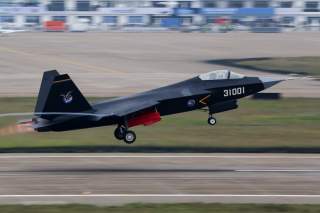 Throughout its history, the People’s Liberation Army Air Force (PLAAF) of the People’s Republic of China (PRC) has lagged behind the aerial programs of other world powers such as the United States. Now, the PRC has set its sights on producing indigenously designed “fifth generation” fighter jets comparable to the US F-22 Raptor and F-35 Lightning II. Many U.S. officials and pilots suspect that the Chinese have been using hacked U.S. technology to aid their indigenous development programs. The PRC is also leveraging additive manufacturing technology (better known as 3D-printing) in order to increase speed and efficiency in manufacturing aircrafts and compete with the U.S. The J-20 Black Eagle could be fully operational by 2018, and a second model, the J-31 Gyrfalcon, by 2020. If true, China’s new generation of fighters could have a substantial impact on its ability to either defend what it considers to be sovereign airspace, or to mount an aerial offensive in a wartime scenario, particularly against Taiwan (ROC).

Recent Advances in the PLAAF

Between 1990 and 1992 the PRC purchased 24 Su-27 Flankers from Russia and slightly modified the design to become the J-11 Flanker B+.  In response, the U.S. sold 150 F-16 Fighting Falcons to Taiwan. The acquisition of fourth generation Su-27s allowed China’s Air Force to enter modernity, and they have become progressively more capable ever since. In 2010, half of the PLAAF fleet still consisted of jets modeled after 1950s and 1960s Soviet MiG-19 Farmers and MiG-21 Fishbeds, but China’s ability to project air power has increased significantly within the past 5 years. Recently, the PRC and Russia have nearly completed a deal to transfer 24 Russian Su-35 Super Flankers, a potent “generation 4++” fighter, to the Chinese, in addition to China’s scheduled integration of fifth generation technology.

Currently the PLAAF relies on the J-11 as its primary fighter. However, this model is largely unproven. This aircraft is perhaps most recognized as the fighter variant involved in an August 2014 incident in which a single J-11 intercepted a USN P-8A Poseidon surveillance aircraft 135 miles east of Hainan Island. Twice the J-11 came within 50 yards of the U.S. aircraft. The aggressive maneuvering by the Chinese pilot was an example of the PLAAF making it clear that U.S. surveillance is not appreciated within the airspace over its exclusive economic zone (EEZ).

Since 2008 the PRC has worked to design and manufacture fifth generation concepts, both for its own use and to sell on a global scale. Two companies in China have worked on designs: the Chengdu Aircraft Industry Group (J-20) and the Shenyang Aircraft Corporation (J-31). Both are subsidiaries of the state-owned Aviation Industry Corporation of China (AVIC). It is likely that the J-20 and J-31 will complement one another when integrated into the PLAAF’s arsenal. The J-20 is closer to becoming operational, with an inaugural test flight in 2011; it is expected to reach initial operating capability (IOC) by 2018. Because both jets are still in prototype stage, their exact capabilities are not certain. However, it is speculated that the J-20 will provide a long-range strike system capable of reaching anywhere in the Western Pacific region, and incorporate a stealth design; the first of its kind in the PRC. In a conflict, the J-20 would likely be deployed in air-to-air combat with the mission of limiting the enemy’s radar coverage and strike range. The J-31 could be a potent complement to the J-20, similar to the planned U.S. partnership of the F-22 and F-35.  While the J-20 is expected to possess superior dogfighting abilities, the J-31 will be “the perfect fighter for the PLA to carry out anti-access area-denial (A2AD) strategies in the Western Pacific”. The J-20 is slightly faster, with a maximum speed of Mach 2.5 compared to Mach 2 for the J-31. Both sport a combat radius of approximately 2000km (1242 miles).

U.S. officials believe that the J-31 will immediately match or exceed the capabilities of U.S. fourth generation fighters such as the F-15 Strike Eagle and F/A-18 Super Hornet, and could possibly even compete with the F-22 or F-35. But this would largely depend on several factors including the quality of Chinese pilots, the quantity of fighters produced, and the reliability of radar and other equipment on board. In late 2014, AVIC President Lin Zhouming made an even bolder prediction, saying, “When [the J-31] takes to the sky, it could definitely take down the F-35. It's a certainty.” Even if neither of the Chinese fighter jets is entirely up to par with U.S. fifth-gens, they still could drastically change the dynamic of both a conflict with the U.S. or a scenario such as an invasion of Taiwan.

If the PRC decided to launch an attack across the Taiwan Strait, a contingency that it practices every year, air superiority would be essential for three reasons: the relatively small amount of airspace available over Taiwan; the ROC Air Force’s (ROCAF) ability to saturate its airspace with its own fighters, and the ROC's extensive surface-to-air missile defense system. If the PLAAF is unable to prevent or significantly limit attacks against its naval vessels when crossing the Strait, the mission would almost certainly fail. Ultimately, the PRC’s accumulation of cutting-edge fighter technology could provide the critical air advantage over the ROCAF to carry out a successful invasion, and should be cause for concern at the strategic, operational, and tactical levels of war for the U.S.