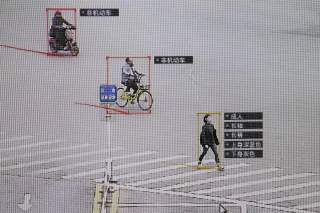 A new, advanced facial recognition system, which can theoretically scan the entire Chinese population of 1.3 billion people within one second, has quietly entered service with public-security apparatus in 16 locations across China to help police crack down on criminals and improve security.

However, its name, Sky Net, is somehow eerily reminiscent of the kind of surveillance in George Orwell wrote about in his dystopian novel Nineteen Eighty-Four.

Xinhua reports that by leveraging motion facial recognition and big-data technology, the system can accurately and instantly identify people’s faces from different angles and under poor lighting conditions, even if people are in constant motion as when riding an escalator or driving a car.

The system is fast enough to scan China’s population in just one second, and it only needs two seconds to scan each and everyone on the planet, with an accuracy rate of up to 99.8%, its lead developer Yuan Peijiang claimed.

Surveillance cameras in the streets constantly feed police the locations of everyone out there, and the legions of closed-circuit TV cameras can follow people’s movements non-stop.

In the past year, more than 2,000 fugitives have been apprehended with the help of Sky Net in one province that participated in the system’s pilot launch, though Xinhua didn’t specify the name of that province.

Once a person’s facial data are entered, surveillance cameras throughout the nation can identify him the moment he appears in the street, said Li Wei, a counterterrorism expert at the China Institute of Contemporary International Relations.

Xinhua didn’t spell out more information about the developer of Sky Net, but it’s believed that the Zhejiang-based tech firm HikVision, which already has a stranglehold on the global security and surveillance market, collaborated with experts from the Chinese Ministry of Public Security in launching and maintaining the system.

Facial recognition technology has been widely used in counterterrorism and crime-busting efforts, and it also helps locate missing people and abducted children.

Last June, the system managed to build a facial profile of a missing girl in northwestern China’s Xinjiang Uyghur Autonomous Region simply by scanning an old photo of the six-year-old taken several years ago. Before long the girl was found after she was spotted by a surveillance camera in front of a market.

Li stressed that the data in the system are safe, with strict government oversight that prevents unauthorized use or interception.

Zhao Zhanling, a legal counsel of the Internet Society of China, echoed that facial information was only collected in public places and thus wouldn’t intrude on people’s privacy, adding that reports to the contrary by Western media were “biased and ignorant.”

“Surveillance cameras are everywhere in their countries too,” the legal expert told Xinhua.