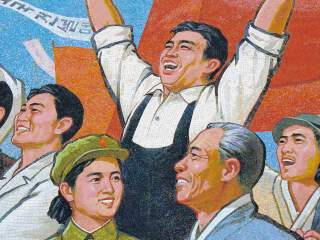 China’s top Korean War historian provided an unexpected take on the current crisis on the Korean Peninsula and China’s relationship with North and South Korea.

The Trump administration has been pushing China to pressure its unruly neighbor, and while China has made some concessions, Beijing is still pushing back. China does not “hold the crux and the key to resolving” the North Korea issue, Chinese Foreign Minister Wang Yi told reporters Monday. Beijing has restricted coal imports from the North, cutting off a key source of revenue for the regime, but bilateral trade between China and North Korea appears to be on the rise.

South Korean businesses have taken a serious hit as a result.

“North Korea is China’s latent enemy, and South Korea could be China’s friend,” Shen explained, “I have been really disgusted by how China has handled THAAD.”

“I have no idea whose idea that was, but what you’ve done is stir up such a ruckus that South Korean shops have had to close, and you’ve smashed here, smashed there,” he said, “You’ve got no foreign policy smarts.”

Shen reminded his audience that when China and South Korea normalized relations in 1992, the China-North Korea treaty alliance between the two countries became nothing but “scrap paper.”

North Korea’s nuclear ambitions is causing the instability on the peninsula — North Korea tests a nuclear weapon, and the U.S. sends in troops and strategic military assets. The situation escalates as the cycle continues, making things more dangerous for China and South Korea, not the U.S. Shen argues that if Washington and Beijing fail to find a peaceful way to resolve the crisis in Korea, then the two will need to cooperate on a military response to properly address this issue.

“If North Korea really does master nuclear weapons and their delivery, then the whole world will have to prostrate itself at the feet of North Korea … The longer this drags out, the better it is for North Korea,” Shen explained.

While China often considers the U.S. a greater threat to its interests, there are those in China, like Shen, who have determined that the North has ceased to be an asset, becoming a serious liability.

Nationalists have criticized Shen, but a transcript of his speech is still available online. As it has not been censored, as has been the case with past reports critical of Pyongyang, it’s online presence suggests that Beijing’s attitudes towards its neighbor may be starting to shift.

Whether or not China’s policies change, however, is another question entirely.