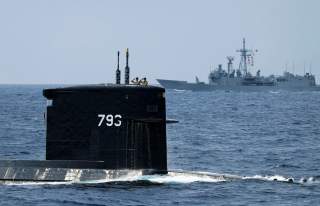 Even as they tussle over trade, China and the United States are entering into a more under-the-radar dispute over Taiwan.

Last week, the State Department approved a marketing license that allows U.S. defense companies to explore selling Taiwan technology it needs to build submarines. The approval was reported by Taiwanese media outlets who cited Maj. Gen. Chen Chung-chi, a Ministry of National Defense spokesman. Sidney Lin, a spokesperson for Taiwan’s president, also confirmed the news. The United States itself refused to confirm the reports, according to Reuters. Even if the United States took this step—which seems extremely likely—it is merely a first step in a long process. To actually transfer technology to Taiwan, each U.S. defense firm would still need to obtain export permits.

Beijing’s condemnation was swift, with a Chinese National Defense Ministry spokesperson calling for a “halt [to] all forms of military links between the United States and Taiwan, as well as all forms of weapon sales to Taiwan.” The spokesperson, Wu Qian, added: “China’s military has the ability and determination to defeat all attempts to separate our country, and it will adopt all necessary measures to resolutely defend national sovereignty, security and territorial integrity.”

Taiwan desperately needs more advanced submarines to protect itself from an growing pressure campaign from Beijing. Last year, President Tsai Ing-wen declared, “Strengthening underwater combat capabilities is most needed in Taiwan’s defense. . . . This is a problem everyone recognizes. We have been unable to solve this in the past. As commander of the armed forces, I am determined to solve this problem.”

Currently Taiwan’s underwater fleet consists of a measly four dated subs. Its newest vessels are two Dutch-built 2,600-ton Hai-lang–class diesel-electric submarines that were purchased and delivered in the 1980s. The other two are the Hai Shih and Hai Pao, which were built for the U.S. Navy in World War II and given to Taiwan in the 1970s. Suffice to say, these latter two are the oldest submarines in service anywhere in the world.

As President Tsai alluded to, Taiwan has long been hunting for newer submarines. Shortly after taking office in 2001, U.S. president George W. Bush approved a plan to help Taiwan acquire eight diesel-powered submarines. Immediately, however, questions began swirling over how the United States planned on fulfilling this pledge. After all, the United States stopped building conventionally powered submarines in the 1950s.

The two main producers of those types of submarines at the time were Germany and the Netherlands. These countries did not want to sell submarines to Taiwan, out of fear of offending China. Furthermore, according to contemporary news accounts, the Bush administration had failed to consult with either country before approving the sale. “We read about it in the newspapers,” Henrik Schuwer, the deputy chief of mission at the Dutch embassy in Washington, told the Los Angeles Times in 2001. A German embassy spokesman also confirmed to the LA Times that “there were no talks whatsoever.” Although the United States is believed to have pressured both countries to agree to export submarines to Taiwan, neither one relented. Some outside observers have suggested that Japan could be a candidate to sell Taiwan diesel-electric submarines, since Tokyo is a pioneer in the field and and has a strong interest in Taiwan’s independence. So far, this has not occured.

With no foreign sellers available, Taiwan has begun pursuing an indigenous program. In December 2016, local shipbuilder CSBC Corp. was awarded an $80 million contract to begin working on submarine designs. The following March, CSBC, the Taiwanese Navy and the National Chung-Shan Institute of Science and Technology signed a procurement contract and memorandum of understanding. They are reportedly exploring a design for a 1,200-to-3,000-ton sub. The official timeline for the submarine is four years for the design of the ship, four years for construction and two years of testing. Thus, the first boat wouldn’t be operational for ten years at a minimum.

The challenges (not to mention expense) of building a homegrown boat are hard to overstate. As Kyle Mizokami has pointed out, “Taiwan will basically start from square one in designing this submarine. The country is so bereft of submarine design experience that in 2015 it was reportedly ready to tear down one of the World War II-era subs to figure out how to build modern submarines.” Thus, the more help Taiwan can get from American and other foreign firms, the better.

The cost factor is significant, as Taiwan has estimated the first four boats alone might cost $5 billion. But, all things being equal (which is obviously not really the case), it is hard to argue with the strategic logic of Taiwan having a formidable underwater fleet. China can increasingly dominate the air in any battle with Taiwan, and it has thousands of missiles pointed at the island nation. Still, if Beijing wants to conquer Taiwan, at some point it would have to send an amphibious invasion force. Taipei’s best bet is to pursue a sea-denial strategy that prevents Chinese forces from being able to cross the Taiwanese strait. Nearly silent submarines laying in wait to sink Chinese amphibious assault ships would greatly complicate Beijing’s war plans.