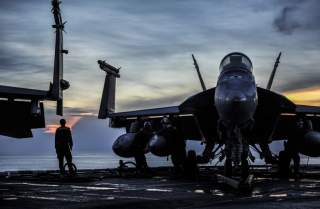 Washington and New Delhi are getting a lot more serious about military-to-military ties. As the United States and India become more wary of an increasingly assertive China, the two countries are gradually edging closer together.

On May 16, American and Indian officials met for a “maritime security dialogue” in New Delhi. “The dialogue covered issues of mutual interest, including exchange of perspectives on maritime security development in the Asia-Pacific and Indian Ocean Region as well as prospects for further strengthening cooperation between India and the United States in this regard,” stated an Indian Ministry of External Affairs press release.

Washington and New Delhi are also close to formalizing a historic military cooperation agreement hazily called the “Logistics Support Agreement” — or LSA. The agreement would allow the two militaries to use each other’s land, air and naval bases for resupplies, repairs and conducting operations.

American and Indian officials agreed to hold the summit during an April visit by U.S. Defense Secretary Ash Carter. Despite regular meetings and joint military training, the United States and India are not allies in any formal sense. India was officially unaligned in the Cold War but kept close relations with the Soviet Union — and the United States backed arch-rival Pakistan.

But there is a slow yet historic realignment underway. First of all, the United States and India are both growing warier of China’s rise as a major regional military power. Second, the U.S.-Pakistani relationship has deteriorated during the course of America’s decade-and-a-half-long war in Afghanistan. Meanwhile, Pakistan is the world’s top recipient of Chinese weapons.

In an April profile in The Atlantic, Jeffrey Goldberg wrote that U.S. Pres. Barack Obama “privately questions why Pakistan, which he believes is a disastrously dysfunctional country, should be considered an ally of the U.S. at all.”

Then there’s the LSA, which — if signed — could enhance cooperation between the U.S. and Indian militaries to an unprecedented level.

Adm. Harry Harris, chief of the U.S. Navy’s Pacific Command, told Congress in February that America and India are negotiating the LSA, another agreement called the CISMOA that would allow secure communications when both militaries operate together, and a third agreement regarding the exchange of topographical, nautical and aeronautical data.

“We have not gotten to the point of signing them with India, but I think we’re close,” Harris told the U.S. House Armed Services Committee.

During the last few months, the proposed agreements has come closer to being a reality. “Secretary Carter and I agreed in principle to conclude a logistics exchange memorandum of agreement in the coming months,” Indian Defense Minister Manohar Parrikar said during Carter’s April visit.

These developments build on previous moves between the Indian and U.S. governments. In 2012, then Defense Secretary Leon Panetta directed Carter — at the time his deputy — to head an initiative to widen the scope of mil-to-mil cooperation between the two counties. The result was the U.S.-India Defense Technology and Trade Initiative (DTTI).

“The DTTI is not a treaty or a law,” the initiative’s website states. “It is a flexible mechanism to ensure that senior leaders from our nations are persistently focused on the opportunities and challenges associated with growing our defense partnership.”

Through DTTI, American and Indian officials have discussed sharing technology and boosting business ties between the two countries’ defense industries.

During Carter’s April visit, he discussed the possibility of sharing technology to help New Delhi build its first domestically produced aircraft carrier INSVishal — a deal the two countries have been negotiating through DTTI under the auspice of the “Aircraft Carrier Working Group.”