China's Worst Nightmare: Would America Sell the F-35 to Taiwan? 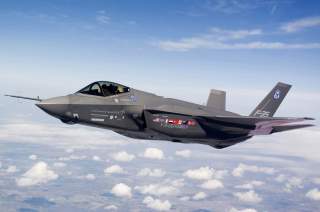 Two top US Republican senators reportedly asked the Trump administration on Monday to approve the sale of F-35 stealth fighter jets to Taiwan, saying it would help the island nation “remain a democracy” in the face of a rising military threat from China.

“These fighters will have a positive impact on Taiwan’s self-defense and would act as a necessary deterrent to China’s aggressive military posture across the Asia-Pacific region,” Senators John Cornyn, the assistant majority leader, and James Inhofe, a senior member of the Armed Services Committee, said in a letter to President Donald Trump.

“After years of military modernization, China shows the ability to wage war against Taiwan for the first time since the 1950’s,” they wrote. “However, with your leadership, it is possible to help Taiwan remain a democracy, free to establish a relationship with China that is not driven by military coercion.”

The White House didn’t immediately respond to a request for comment from news media. But close attention is being paid to the letter since it follows Trump’s appointment last week of John Bolton as national security adviser. Bolton is a tough critic of Beijing and the United States’ “One-China” policy.

Defense One noted that Taipei is requesting the F-35B maritime vertical takeoff and landing (VTOL) version of the US strike fighter. The plane can operate from the decks of warships, short landing strips and commercial airports.

“Taiwan has a legitimate requirement to field a modern fighter fleet to address a myriad of defense contingencies,” Cornyn and Inhofe wrote in their letter to Trump on Monday. “Therefore, Taiwan is requesting US support in their procurement of the F-35B.”

But Defense One quoted some analysts as saying that selling the F-35 to Taiwan would anger China and pose more of a risk than a deterrent. This, despite the fact that the aircraft “is ideally suited for Taiwan’s military.”

“You would be upping the ante significantly not just between the Taiwanese and Chinese, but between the United States and China,” John “JV” Venable, a retired fighter pilot who is now an analyst with the Heritage Foundation was quoted as saying. “I’m not sure that’s worth the risk for the United States.”

The fifth generation Lockheed Martin F-35 was reportedly part of a package of new arms sales to Taiwan that the Trump administration was mulling last spring. But a decision on selling the plane to Taipei was put on the back burner ahead of Trump’s November visit to Beijing and other Sino-US negotiations.