Chinese Assertiveness in the South China Sea: What Should Vietnam Do? 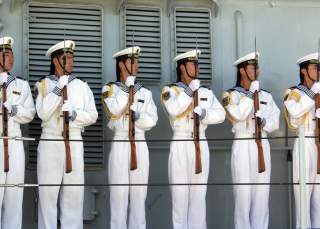 Since 1 May, China has deployed the Haiyang Shiyou 981 floating oilrig off the central coast of Vietnam for an exploratory mission. Vietnam has been infuriated as the rig has been parked well within Vietnam’s lawful Exclusive Economic Zone (EEZ), just 120 nm from its maritime baseline. It has also caused widespread concerns across the region.

The incident is the latest development in what can be seen as a new wave of Chinese assertiveness in the South China Sea following its successful de facto seizure of the Scarborough Shoal from the Philippines in 2012. After a relatively calm year of 2013, this new wave started earlier this year with China’s siege of the Second Thomas Shoal in the Spratlys. There are also reports that China has been actively preparing for the construction of an airstrip on the Johnson South Reef, which it occupied after a naval skirmish with Vietnam in 1988.

Deploying oilrigs in Vietnam’s EEZ isn’t a new tactic for China in its maritime disputes with Vietnam. In 1997, and in late 2004, China deployed the Kantan-3 floating oil platform to drill in Vietnam’s Block 113 off Thua Thien-Hue province. In both cases, China had to withdraw the platform after Vietnam issued diplomatic protests.

Nevertheless, the deployment of the Haiyang Shiyou 981 can still be seen as an escalation of Chinese assertiveness. Unlike the Kantan-3, the new rig is equipped with much more advanced technologies that make drilling more feasible in deep-water areas. Although it’s still unclear whether the rig has indeed undertaken drilling, the enhanced feasibility of the operation means that this time China is able to pose a more credible threat to Vietnam’s legitimate rights and interests.

Vietnamese authorities also report high levels of Chinese aggression at the scene. For example, China has dispatched up to 80 vessels from different forces, including seven naval warships, to the scene to protect the rig and to intimidate the Vietnamese vessels. Chinese vessels were reportedly using high-pressure water pumps to attack Vietnamese ships. Some also rammed Vietnamese vessels intentionally, causing major damage and endangering the lives of Vietnamese crew.

Against this backdrop, questions arise as to why China has targeted Vietnam rather than other claimant states in the South China Sea.

First, China might have considered Vietnam a more ‘convenient’ target than other ASEAN claimant states. Targeting Vietnam might not stir up as much concern and protest from other powers as targeting the Philippines, which has recently tightened its military cooperation with the US.

Second, the rig’s area of operation is close to the Paracels, which facilitates China’s protection of the rig. In that sense, it’s physically easier for China to coerce Vietnam than other claimants for simple reasons of geography.

Third, Vietnam is China’s biggest rival in the South China Sea so targeting it can provide Beijing with an opportunity to test Vietnam’s genuine capabilities and resolve. Vietnam has recently invested considerably in upgrading its navy as well as paramilitary forces, such as the Vietnam Coast Guard and the newly-established Vietnam Fisheries Resources Surveillance.

Fourth, Vietnam has recently made efforts to forge closer ties with the US so the deployment of the rig might serve as a timely reminder of the consequences of such actions.

Regardless of what China’s intentions might be, its deployment of the rig is undoubtedly a serious threat to Vietnam’s legitimate interests. Vietnam must therefore stand up to the Chinese challenge. Unfortunately, Vietnam seems to have only a limited range of options to deal with this.

It’s obvious that Vietnam isn’t willing to use force to evict the rig from its EEZ—it risks a major war with China, which is undesirable for Hanoi. Vietnam’s restraint in using force is therefore understandable, although it might raise doubts regarding Vietnam’s deterrence capabilities against China.

As a result, the most important thing Vietnam can do now is to name and shame China internationally and to enlist international diplomatic support in denouncing China’s actions. In addition to diplomatic protests, Vietnam will likely maintain the constant presence of its paramilitary vessels around the scene, at least as a form of protest against China’s actions, if not as a tactic to obstruct the deployment and operation of the rig.

The most likely outcome is that there’ll be a standoff between the two countries over the rig until August 15, the date China announced it would withdraw the rig. Still, it’s unclear as to whether China will do so, and if so, whether it’ll move the rig back to its waters or simply to another location unacceptable to Vietnam.

Le Hong Hiep is a PhD candidate in Politics at the University of New South Wales, Australian Defence Force Academy, Canberra, Australia. The following article was originally published by ASPI’s The Strategist here.