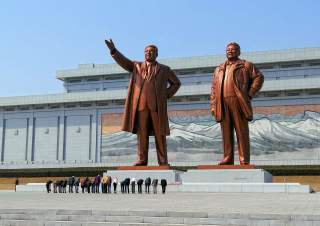 North Korea appears to have built up its weapons program with a little bit of outside help.

While China claims that it fully implements U.N. sanctions against North Korea, one Chinese state-owned company maintained a joint venture with a sanctioned North Korean company for nearly a decade, reports the Wall Street Journal.

China’s Limac Corp. and North Korea’s Ryonbong General Corp. established a joint venture in 2008 to mine tantalum, niobium, and zirconium—materials that can be used in nuclear reactors and missile technology. The U.S. sanctioned Ryonbong for its involvement in the production of weapons of mass destruction in 2005, and the U.N. followed suit in 2009.

Limac told the WSJ that it has been trying to dissolve the partnership since 2009, yet the joint venture maintained a registered corporate office in China until February. Limac’s website reportedly showed that Ryonbong and Limac representatives discussed advancing the relationship in 2011, and 14 Limac employees visited North Korea as part of a company-sponsored vacation in 2014. This information has since been deleted from the website.

The joint venture reportedly set up on office Dandong, a Chinese city on the North Korean border, in 2013. The office had its registration revoked in February after it failed to file its inspection reports.

The Washington Post revealed in April that North Korean missiles were built with components brought into the country via China, a primary source of trade for the reclusive regime. For instance, an Institute for Science and International Security report revealed that Shenyang Machine Tools Company in Northeastern China sent banned products to North Korea, a country with which the Chinese company maintained close ties as recently as late 2015.

Experts told the Washington Post that the parts that have entered North Korea via China have allowed the impoverished and isolated regime to develop weapons that it might not have otherwise been able to do organically.

An estimated 600 Chinese companies are engaged in trade with North Korea, and while much of that trade is likely legal, some may be in violation of international sanctions. Through its connections in China, the regime has managed to get its hands on technological components essential for weaponry.

It is unclear whether the Chinese government is complicit, apathetic, or unaware. In some instances, China has taken steps to crack down on companies violating international sanctions. China arrested 11 corporate executives of Hongxiang Industrial Development Co. in September, including founder Ma Xiaohong, for exporting dual-use products that can be used in the production of nuclear weapons. Beijing pushed back when the U.S. sanctioned the company and several Chinese nationals unilaterally. Other companies, such as Limpac, have apparently been flying under the radar.

The U.S. has the power to sanction entities that conduct business with sanctioned North Korean entities, but the U.S. has hesitated to sanction Chinese companies. The Trump administration is putting its hopes on Beijing to rein in North Korea, which has conducted nine missile launches since President Donald Trump took office. The administration has put forward a policy of “maximum pressure and engagement” which involves increased pressure and tougher sanctions. The president has said that he is “confident” that Chinese President Xi Jinping will do what is necessary, but only time will tell.

Content created by The Daily Caller News Foundation is available without charge to any eligible news publisher that can provide a large audience. For licensing opportunities of our original content, please contact [email protected]sfoundation.org.