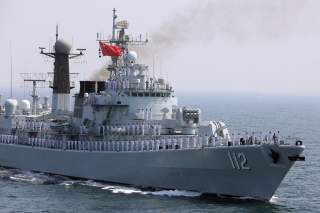 Sea tests of China’s indigenous electromagnetic railguns are underway, Chinese papers have revealed, quoting delegates of the People’s Liberation Army who are attending the annual parliamentary session in Beijing.

This has been further confirmed by a feature on the PLA-run news portal 81.cn about a female lead engineer who was the brains behind a repeating pulsating direct current power system that could charge the railgun.

Zhang Xiao, associate research fellow at the Wuhan-based PLA Naval University of Engineering, said the breakthrough was a hard-won result after hundreds of failures and more than 50,000 tests.

She also led a team that scaled the technical hurdles of installing shipborne electromagnetic launching systems, believed to be planned for use in future Chinese aircraft carriers.

The Global Times quoted commentators as saying that the United States used to maintain a lead in developing such state-of-the-art power systems, but the breakthrough could bring the PLA Navy into the same league as the US in railgun development and trials.

Railguns use electricity to generate strong electromagnetic fields between two rails. A conductive metal device, called an armature, picks up a projectile and accelerates down the path between the rails, slinging the projectile downrange at hypervelocity.

China is also set to be the first country to mount a railgun on a warship. The PLA landing ship Haiyang Shan, carrying what appeared to be a shipborne railgun, was seen undergoing tests at a dock in Wuhan before its reported sea trail this year.

The test was a massive project, involving more than 200 staffers from 20 different units, according to the website.

The electromagnetic railgun is a key frontier of the next generation of weaponry that will replaces gunpowder with electricity and magnetism.

The power supply must be able to deliver large currents, sustained and controlled over a useful amount of time, with the key determinant being the energy it can deliver.

For instance, during an experiment by the US Navy in 2010, a power-supply system generated 33 megajoules to propel a projectile from a railgun.