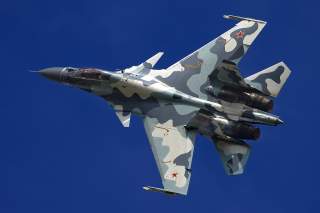 Two Chinese Su-30 fighters came within 150 feet of a U.S. WC-135 radiation detection plane flying over the Yellow Sea, U.S. officials revealed to CNN Thursday. One of the planes flew upside down above the American aircraft.

The WC-135, nicknamed the Constant Phoenix, is a radiation sniffer, a plane often used to collect information after North Korea tests a nuke. A radiation detection aircraft was dispatched to Japan in early April, and several sorties have since been flown in the region.

American officials deemed the close call “unprofessional” behavior on the part of the Chinese.

Two interceptions occurred last year, one in the South China Sea and one in the East China Sea. In the second case, a Chinese J-10 fighter came within 100 feet of a U.S. Navy RC-135 reconnaissance aircraft