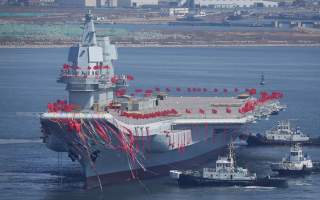 A senior CIA analyst has offered a rare public glimpse into American intelligence analysis of China. Michael Collins, deputy assistant director and head of the agency’s East Asia mission center, believes more attention should be focused on China and that recent public angst about Russia is distracting America from the threat posed by China.

“There’s been a lot of talk about Russia as a competitor, a country that sees the liberal international order as something they don’t necessarily subscribe to, that is actively engaged in trying to undermine US influence in various areas around the world, and that has [the] capability to do it,” Collins said at a security forum in Aspen, Colorado.

“I would argue China applies to all three of those as well, and increasingly has more power to do far more about that issue.”

Collins noted that while Russia has been creating problems for the United States internationally, Moscow also finds US-China tensions to its liking.

From the CIA’s point of view, China is undermining the US-led international order that has brought peace and stability in Asia over the past 40 years. Beijing is seeking to usurp American power and influence in the region.

China-US competition is not limited to Asia but is also visible around the world, Collins said, pointing to China’s recent launch of a major military base on the strategic Horn of Africa, in Djibouti. The Chinese base is located close to the US military’s based in the same nation.

One problem is China’s anti-democratic system.

“They have a different view of governance and what that means, and they are increasingly resorting to coercive, assertive practices to achieve their ends, things that we don’t subscribe to and others in the region don’t subscribe to,” Collins said. “For us to understand such issues as North Korea, South China Sea, trade, how China’s approaching these issues, we have to be mindful of that.”

Unlike Harvard scholar Graham Alison, however, Collins does not believe the US and China are destined for war. China, he says, does not appear to seek conflict with the US or other nations, and is seeking to maintain stable ties with Washington.

An additional problem for Beijing relates to what Collins termed “domestic political vulnerability and stability.”

“And to them, they have to keep that quite secure and to that end they need stability and close relations and stable relations with the United States,” he said.

On the South China Sea issue, Collins said China is emerging from what he termed an “aspirational pursuit of territorial claims” to an increasingly pressure-oriented policy. Chinese aspirations involve controlling the waterway for several reasons – military, economic, political and in terms of overall influence.

“It’s one thing for those things to be aspirational and another thing for them to think they are actually attainable,” Collins said. “And increasingly it appears to us that the Chinese think what they’re moving forward in the South China Sea, and you can apply this elsewhere as well, [is] increasingly attainable.”

China’s growing resolve is a worry for the CIA and Collins said it was fueled by inaction against Chinese hegemony in recent years.

“Unfortunately I think the Chinese have learned over the last several years that they have been able to take coercive approaches to moving into the South China Sea and in other areas – I could apply the same model to other issues, be it in the economic arena or the political arena around the area – and they’ve gotten away with it without much of a blow back,” he said.

The recent UN Permanent Court of Arbitration ruling against China’s claims to 90% of the South China Sea was met with scorn by Beijing.

“They learned from that, in our view, that they can defy international law and get away with it,” Collins said.

The analyst warned that China’s increasing boldness does not augur well for the United States or other countries in the region.

“The Chinese continue to think they can get away with and push the envelope on coercive, more assertive approaches to doing this,” he said. “We worry they will continue to push that envelope.”

Internally, in China, Collins also warned that Chinese leaders are pushing the narrative on the need to take control of disputed waters as “something that the Chinese need to achieve.”

In the past, China’s communist leaders limited their concept of core national interests to defending Communist Party rule and regaining control over Taiwan. Now, they have expanded the definition of core interests to include the South China Sea.

“And in doing so they’re creating domestic expectations that I worry they’re going to have to try to respond to, and in difficult ways,” he said.

Asked if the United States and China are playing a “game of chicken” – testing to see where each other’s red lines are located – Collins said the game is more on the Chinese side.

“The Chinese are learning what I call it a didactic foreign policy, a didactic approach to learning what it is they can get away with,” Collins said. “My hope is that the Chinese increasingly start to see that their behavior – and not just from us, from East Asia – is actually creating more negative consequences, net negative outcomes for their security interests and overall stability than the positive they think it gets them.”

Collins said the new administration of US President Donald Trump is in a critical period in terms of helping to shape China’s perception of the United States.

Beijing expects some degree of tension in its relations with the US but is uncertain at what point tension spills over into confrontation.

One area where the Trump administration is pressing China hard is on rening in North Korea. The CIA believes that, as it provides the rogue state with some 90% of its trade, China could be doing much more. Collins said he believes Beijing supports the denuclearization of North Korea but has adopted a much longer timeline for when that takes place than the United States would like.

On China’s leadership, Collins said he expects supreme leader Xi Jinping to emerge from the upcoming Communist Party congress strengthened. “It looks like he’s going to come out of this party congress all the more powerful,” he said.China wants North Korea as a strategic buffer zone to keep the US and its allies at bay.

The CIA even believes Xi could seek to extend his rule beyond the established limit of two five-year terms, much as the late Deng Xiaoping was able to rule behind the scenes during the 1980s.

“Regardless of what position he’s in, given the allegiances he established, he’s going to remain probably pretty influential,” he said.

Collins also questioned one of the fundamental precepts of American foreign policy – that trade and engagement with China would produce democratic political reforms.

“I think there has been an over-optimism that engagement with China will have led to political reform by this point, and the reforms that we may have expected perhaps from the Chinese by engaging we’d start to see them by now. We haven’t.”