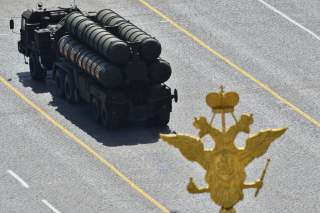 The Kremlin is reequipping air defense units currently armed with the S-300 surface-to-air missile system with the potent new S-400 in the Russian Far East. Though long scheduled, the new S-400 batteries are set to become operational in December 22 in the Primorsky territory just as tensions are rising in the region on the Korean peninsula.

As Vasily Kashin, a senior fellow at the Center for Comprehensive European and International Studies at Moscow's Higher School of Economics told The National Interest, the deployment of the S-400 was long-scheduled even if the timing appears convenient. “From the MoD statement, it looks like it is a scheduled rearmament of the existing S-300 units with the new systems,” Kashin said. “It is not an additional force relocation there.”

Kashin conceded that there might be a tangential connection between the developing standoff in Korea and the S-400 deployment, however it is clear that the Russians are not deploying additional forces to the region. “Maybe it has something but it is not some kind of surge of forces,” Kashin said.

For the Russians, the concern is that if there is a war in the region between North Korea and the United States and its allies, Moscow fears that there could be accidental strikes into its territory. Because of that possibility, Russia needs to have strong air and missile defense capability available to counter any potential threat.

Russian fears of an accidental strike are not based on abstract concerns, but rather history. During the original Korean War, Soviet territory occasionally fell into the crossfire between the belligerents despite Moscow not being an official party to the conflict.

For the Russians, the deployment of capable air defenses to the region are preventative measure for any new outbreak of war on the Korean peninsula. “There is also threat of attacks on our territory by mistake in case of war like the ones happened during the Korean War,” Kashin siad. “So a good air defense is needed there.”

Hopefully, with any luck, saner heads will eventually prevail in during the United States’ current impasse with North Korea. However, the tensions between Washington and Pyongyang are very real and could spillover into a shooting war. Thus, it only makes sense for the Kremlin to bolster its defenses in its Far East as tensions continue to increase.