Cluster Bombs Are Back—and America and Russia Can't Get Enough 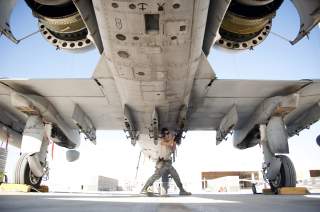 Cluster weapons—those mini-bombs that have cost many a civilian their foot or their life—are back.

Russia has just unveiled what it describes as a stealth cluster bomb. This comes after the Trump administration scrapped a plan to eliminate cluster weapons by 2019, despite 103 nations signing on to an international agreement to ban production and use of such weapons.

So far, 120 nations have joined the 2008 Convention on Cluster Munitions, of which 103 have actually ratified it. Unfortunately, the two biggest arms exporters in the world—America and Russia—have yet to join.

Russia is testing the PBK-500U glide bomb, a 1,000-pound GPS-guided weapon with a range of about fifteen miles. Each bomb contains up to fifteen thirty-three-pound bomblets, each equipped with infrared and radar sensors to steer the bomblet on to the thin top armor of a tank. Russian media describes it as "virtually invisible" to radar and infrared sensors, and allegedly can't be jammed.

Sputnik News also claims that "Russian sub-munitions are way smarter than their U.S. counterparts." That distinction is lost on human rights organizations that have been fighting to ban cluster weapons because unexploded bomblets are a danger to civilians.

"This kind of munition would be prohibited by the 2008 Convention on Cluster Munitions," Mary Wareham, a researcher and cluster bomb expert at Human Rights Watch, told the National Interest.

The new Russian bomb clearly violates the convention. Yet America is no position to criticize Russia. In November 2017, the U.S. government reversed a 2008 plan by the Bush administration to scrap U.S. cluster weapons. Most of the U.S. cluster bomb arsenal is in South Korea, where there is a stockpile of 1.5 million cluster weapons and ninety-million bomblets. The last time the United States used cluster weapons was in Yemen in 2009, according to the New York Times.

There is no denying that from a military perspective, cluster weapons are useful. Instead of one big bomb aimed at one target, a cluster bomb releases dozens or hundreds of small bomblets that can saturate a wide area and destroy multiple targets. Like many nasty weapons, they were first used by the Nazis in the form of the SD-2 "butterfly bomb" (so named for the shape of the bomblet), which was released from containers packing a hundred or more of the devices. Used against the Soviets, the German weapon proved devastating against personnel and equipment. They were also dropped on British cities in raids that killed and terrified civilians.

Cluster weapons, which can delivered by bombs and artillery shells, were used extensively in Vietnam, and the 1991 and 2003 invasion of Iraq. Israel dropped millions on bomblets on southern Lebanon during its 2006 war with Hezbollah, which in turn fired Chinese-made rockets with cluster warheads at Israel. Most recently, Russia has used cluster weapons in Syria.

The problem is that the dud rate for cluster bomblets is estimated to be as high as 30 percent (the Pentagon aimed for a dud rate of 1 percent a few years ago, though that goal seems to have been dropped). That means that after the war is over, civilians return to fields and cities saturated with unexploded devices liable to go off under an unwary farmer's foot or a curious child's hand.

The Cluster Munition Coalition has compiled a list of thirty-four nations that have produced cluster weapons since World War II. Of those, eighteen have stopped and sixteen—including China, India, Israel, Russia and the United States—produce or reserve the right to produce them.

But unless America, Russia and perhaps China sign on to the ban on cluster weapons, civilians will still be endangered by these mini-instruments of death.