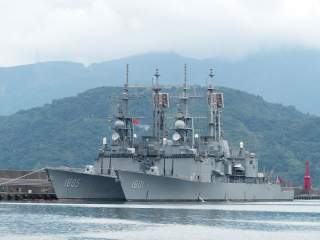 Last Friday, the U.S. House of Representatives passed an amendment to the National Defense Authorization Act (NDAA) of 2015 that included a reference to a recent issue: China’s potential participation in 2016 Rim of the Pacific (RIMPAC) exercise, a biannual multilateral exercise that mostly involves the US and its key allies.  Other nations are invited but do not partake in major parts of the program. China was such a guest last year.

The amendment stipulates that if US Department of Defense invites Beijing to participate in RIMPAC, a similar invitation must be extended to Taiwan.  Not surprisingly, the news was received well in Taiwan. David Lo, Taiwan’s Defense Ministry spokesperson, welcomed the amendment, and Taiwan-based Want China Times ran the headline ‘House passes clause to invite Taiwan to RIMPAC’.

However, before jumping to conclusions, let’s have a look at the exact wording of amendment proposed by Rep. Mark Walker (R-NC):

First of all, the wording of the amendment is quite telling. If China gets invited, the Pentagon must invite Taiwan as well. Let’s put the amendment to a simple test: which scenario appears less complicated? To invite both China and Taiwan-which would no doubt elicit a very loud and unhappy reaction from Beijing? Or to not invite China in the first place and be done with it? It’s rather obvious that despite the excitement on Taiwan’s side, the amendment is more about the absence of China at RIMPAC 2016 than about a potential Taiwanese presence.

It’s likely that Walker’s amendment will make it to the final version of NDAA that will eventually land on President Obama’s desk. Such a provision would be hardly controversial for Republicans who are in the majority, and even if the Senate version didn’t include a similar amendment in its version of the NDAA, it is unlikely to be removed during the reconciliation process of both versions of NDAA. President Obama may veto the bill but the reason won’t be one, uncontroversial amendment, but rather disputes over the Overseas Contingency Operations budget that became a back door for the Congress to bypass restrictions imposed by sequestration.

There is certainly pro-Taiwan element in the amendment. Support for Taiwan has always been a bipartisan issue, a rare quality in the Congress engaged in political bickering between the GOP-controlled legislature and Obama administration. For congressional friends of Taiwan, this amendment is a win-win proposition. It demonstrates Congress’ resolve vis-à-vis China and, at the same time, inclusion of Taiwan in amendments to NDAA is certain to generate positive news in Taipei.

However, amendment or not, China is unlikely to receive an invitation to join RIMPAC 2016 anyway. China’s debut participation in RIMPAC last year was controversial from the onset. Moreover, to dispel any positive impressions, Beijing put on a comical twist on its participation by sending a spy ship that was monitoring the exercises from a distance. By doing so, Beijing gave Washington a golden opportunity to emphasize that just as China did not break any rule by sending such a vessel, nor does the US violate standing international law when it conducts patrols and surveillance outside China’s territorial waters and within its Exclusive Economic Zone (EEZ). That’s worth noting because it’s Beijing who insists that it has the right to regulate third party military activity within the 200 nautical miles zone delimitating its EEZ. If the Pentagon wanted to make Chinese participation in the exercise look awkward, it would have hardly do better than the Chinese themselves. Beijing has now upped the ante in its neighborhood once again by embarking on large-scale island reclamation in the South China Sea, prompting the US to strengthen their patrols in the area. In the light of this development, the chances that Washington would invite China back next year are not exactly high. Thus, the amendment and the publicity it received is—in practical terms—much ado about nothing.

The eagerness on Taiwan’s side is easy to understand. Lacking broad international recognition, multilateral exercises like RIMPAC are typically a no-go for Taiwan. This is not to say that its military does not have opportunities to train with foreign counterparts. There are regular exercises with the Singaporean army in Taiwan while Taiwanese F-16s instructors train at Luke Air Force Base, Arizona. However, the wide array of regular activities simply slips under the radar because both sides need to keep it low profile. Therefore, if there is a chance to acknowledge the US–Taiwan partnership publicly, it is typically in a manner similar to the reporting on this NDAA amendment.

But if Taiwan were to attend RIMPAC 2016, what would its participation look like? This is of course pure speculation, but it’s plausible that Taiwan’s navy would send the newly commissioned fast replenishment ship AOE-532 Panshih rather than a surface combatant. A lightly armed support ship would certainly be less controversial than, for example, a Kidd-class destroyer or Lafayette-class frigate. When contemplating Taiwan’s participation, one needs to understand that for Taiwan it is about symbolism first and practical experiences second. A one-off invitation would not mean much in terms of experience but it would carry great symbolic significance—well served by sending the biggest ship in Taiwan’s navy inventory. But for now, Taiwan’s participation in RIMPAC remains a dream.