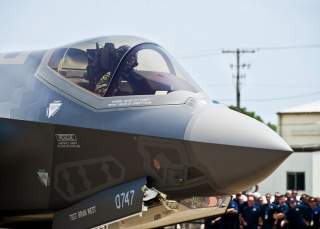 The United States Air Force might deploy the Lockheed Martin F-35 Joint Strike Fighter to the Baltics for an air-policing role once the new stealth aircraft becomes operational later this year. The new fighter is to enter service with the Air Force with an interim software capability called Block 3i that offers limited combat capability.

“We would like to have F-35s—for example—do some Baltic air policing,” Gen. Herbert “Hawk” Carlisle, commander of Air Combat Command told the House Armed Services Committee (HASC) on July 13. “That’s one of the missions NATO does up in the Baltic regions—Estonia, Latvia, Lithuania—in that part of the world and put F-35s up to demonstrate. As I talk to the air chiefs over in Europe in this past week, all of them are very interested for their own countries to be able to see the visibility of that airplane out doing operational missions.”

Carlisle said that the F-35 deployments would be similar to those carried out by its larger twin-engine Lockheed Martin F-22 Raptor stable-mate—that is to send a message to potential adversaries such as Russia. The Air Force’s elite Raptor squadrons often undertake theatre security package missions where twelve jets will deploy to a location for a period of time. More recently, F-22 units have been practicing deploying smaller packages of up to four aircraft called Rapid Raptor—which was pioneered by Lt. Col. Kevin ‘Showtime’ Sutterfield at the 477th Fighter Group in Alaska.

Meanwhile, Carlisle told the HASC that he needs as many fifth-generation assets as he can get. As such, the Air Force is making sure that the F-22 is upgraded with the latest technology. Moreover, the Air Force is looking at possible options to upgrade its oldest Raptors that at are based at Tyndall Air Force Base in Florida with the 43rd Fighter Squadron.

Those oldest Raptors are currently stuck in an obsolescent Increment 2 configuration and are used purely for training. Bringing those jets up to a tactically useful configuration would help the Air Force to squeeze more capability out of its tiny 186-aircraft Raptor fleet. “I would love to take the 43rd Fighter Squadron’s jets down at Tyndall and upgrade them,” Carlisle said. “If it was a cost that was within reason—and with everything else I’m trying to do, I could do—I would consider doing that. We’re right now looking very hard at what it would take to upgrade those airplanes to the latest block capability.”

Carlisle said that resurrecting the original version of the F-22 Raptor might not be a good idea, but the Air Force could use either a modernized version of jet or a next-generation Raptor-like capability. The problem is that the Raptor was built using technology that is now woefully dated. It would take a huge investment of time and money to get the production line up and running—particularly the subcontractors. “We probably would not bring an F-22 back in the form it’s in today,” Carlisle said. “I think that’s technology that’s 30 years old, frankly.”