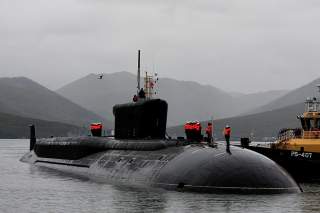 Russia is set to launch an advanced derivative of its Project 955 Borei-class ballistic missile submarine later this year. The new boomer—designated Project 955A—is an upgraded version of the current vessels, three of which are currently in service with the Russian Navy.

"The Project 955A Borey-class nuclear-powered underwater strategic cruiser Prince Vladimir is planned to be floated out in the second quarter of this year," Igor Ponomaryov told them Moscow-based TASS news agency.

Dmitry Gorenburg, a senior research scientist specializing in Russian military affairs at the Center for Naval Analyses, told The National Interest that the new boomer is a significant improvement over its predecessors. “The first is being launched this year, and is expected to be commissioned next year,” Gorenburg said. “There are contracts out for five boats. There was talk of two more being built in the 2020s, but recently the head of naval procurement said that won't be happening.”

Eventually, the new Borei-class submarines will completely supplant the existing Soviet-era Delta IV-class boomers. “That's the long-term plan,” Gorenburg said. “Though there may be some overlap, as currently with Delta IIIs and 955s.”

Compared to the earlier vessels, the new Project 955A has improved acoustics and sensors—but it is not clear if there are structural modifications to the design. “The major differences are that 955A is quieter and more maneuverable, and has better comms and sensors. There have also been some improvements in crew living quarters and survivability,” Gorenburg said. “Dimensions are the same. Not sure what they did to make it quieter and more maneuverable and if that means any difference for the hull.”

Though the missile compartment has been modified, the Project 955A boats will have 16 missile tubes. Early reports that the new Borei-class subs would carry 20 rather than 16 missiles are incorrect.  “That was rumored for a long time, but is not true. It’s 16 tubes, same as the 955,” Gorenburg said. “The original Borei design was for the Sineva missile. It was then retrofitted in a sense for the Bulava. It was also designed largely in the late 1980s. The 955A was designed with the Bulava in mind and takes advantage of technological advances in components made in the last 20 years, while maintaining a more or less unified hull design, which makes maintenance easier and cheaper.”

The Russians are relatively confident in the Bulava missile design—which in earlier years saw repeated failures. However, while the Bulava does not have any fundamental design flaws—the weapon still suffers from failures due to manufacturing problems. “There are still regular test failures due to manufacturing defects,” Gorenburg said. “Basically, they know the design works, but reliability is an issue because of problems with quality control in the manufacturing process.”

Following the completion of the final Borei, the Russians are will likely develop a successor to the Project 955A. “There is talk of a follow-on design, for construction after 2030. But no details have emerged yet,” Gorenburg said.