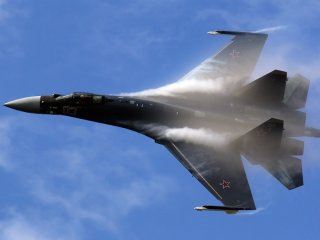 Once again, the South China Sea is back in the news, and once again, it’s for all the wrong reasons.

The People’s Republic of China seems to have one crystal-clear objective: to dominate this important body of water to such an extent that they will be able to enforce what they call their “nine-dash-line” claim that incorporates almost the entire sea.

What comes after that is unclear. For example, would China stop any and all foreign military vessels from transiting, by force if necessary? Would Beijing kick out all so-called foreign fishing vessels? How far do Chinese claims of so-called “indisputable sovereignty” go? Know this—if trends continue, in the next few years, we might just find out.

But in all honesty, we are getting ahead of ourselves just a wee bit. In fact, there are several important steps that Beijing will need to follow before it can dominate this important body of water—and much of it involves control of the skies above.

Indeed, without control of the air domain, China can’t dominant the seas and islands below. And while the People’s Liberation Army Air Force has certainly made big strides over the last twenty years, patrolling such a large area would be a challenge—until possibly now.

Thanks to Beijing’s recent creation of new islands in the South China Sea, along with three new large airfields, China is developing the bases it needs to patrol the skies above to enforce its claims.

What comes next is what really matters: which planes would Beijing place on those airfields? One very distinct possibility is one of the world’s best: Russia’s Su-35 fighter. China just closed a deal to acquire twenty-four of the fighters, and while even basing all of them in the South China Sea might not be enough to enforce a likely future Air-Defense Identification Zone, the advanced Russian jet would give Beijing a big advantage in its quest to dominate the area. And with the first four being delivered this year, Washington and its allies have much to ponder. As Peter Wood pointed out in 2013 for China Brief:

“An important improvement of the Su-35 over the [Chinese] Su-27/J-11B is the ability to carry external fuel tanks, which would be a major factor limiting the Su-27, which does not have aerial refueling capability. . . This is in addition to a 20% increase in fuel capacity over the Su-27 and air refueling capability. This later capability is another important part of China’s strategy of increasing loiter times and distances. “Loiter time” is the amount of time an aircraft can spend in the vicinity of a target, as opposed to reaching the area and returning to base. Generally there are three ways to increase loiter time. Smaller, slower aircraft like the U.S.’s Predator or Global Hawk drones can stay aloft for many hours at a time due to their long wings and lack of a pilot. The other two options are larger fuel tanks or refueling capability. China’s nascent aerial refueling program is not yet fully proven and does not currently involve any naval planes, and is estimated at becoming operationally effective between 2015-2020. . .”

Wood continues on, concluding his work by stating:

“While the Su-35’s technologies will benefit Chinese aviation, its larger contribution lies in enforcement and deterrence in the South China Sea. China’s currently deployed forces in the South China Sea and contested areas could already do significant damage to possible adversaries like the Philippines. Without a combat-capable Air Force and Naval forces largely composed of aging/1960s-era former U.S. coast guard cutters, the Philippines cannot effectively challenge China’s territorial claims. The Sukhoi jets’ larger fuel capacity and in-flight refueling capability mean that Chinese jets could remain on station for longer, enforcing their claims by conducting patrols and interceptions in a more consistent way. Going forward, the combination of the Su-35, China’s extant shorter range fighters, advanced surface-to-air missiles, and long range ballistic and cruise missiles could act as a, strength-in-depth, multi-layered capabilities to protect China’s claims and make others less eager to intervene if China chose to pursue conflict with its neighbors.”

While the above work by Wood is certainly impressive—and a little frightening—it is a little dated, and in this case, actually reinforces much of his claims concerning the Su-35.

As the above was written before China’s extensive reclamation projects in the South China Sea, Wood was clearly discussing basing these planes in mainland China as close to the coast as possible. Clearly basing these planes in Beijing’s newly created airfields, with likely more airstrips to come, will magnify dramatically the impact the Su-35 would have on China enforcing its claims in the South China Sea. And if Beijing reverse-engineers them—as they have done in the past with other advanced Russian fighters—the South China Sea could be a very different place than it is today.