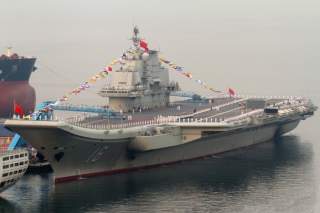 On Monday, Taiwan Focus News Channel cited the Chinese-language The Hong Kong Commercial Daily in reporting that China has begun work on its second aircraft carrier, which will have a more advanced launch system the one currently used on China’s only aircraft carrier, the Liaoning.

According to Taiwan Focus News Channel, the initial report cited Liu Xiaojiang, the former political commissioner of the PLA Navy, as saying that the “government's industrial and manufacturing agencies are now in charge of the ship's construction.” The report also cited Ding Haichun, who was promoted to the position of deputy political commissioner of the PLA Navy back in January, as confirming that China’s second aircraft carrier is under construction.

Taiwan Focus News Channel went on to paraphrase Ding as saying that “after the completion of the ship's construction, it will be turned over to the Navy for training maneuvers.”

Want China Times, which is also based in Taiwan, also carried a story about the original report on Monday.

This is not the first time that Chinese officials have commented about the presumed second aircraft carrier. As I previously reported, back in January 2014 the Hong Kong-based Ta Kung Pao newspaper quoted Wang Min, Party chief of Northeast China’s Liaoning province, as saying that construction on China’s second carrier had begun in the port city of Dalian in Liaoning province. Wang said that the carrier would be completed in six years’ time, and that China ultimately intended to build four aircraft carriers.

That report was quickly taken down.

Similarly, last month another local Chinese government, that of Changzhou, a city in Jiangsu province, published a report saying that a local company had been awarded a deal to supply products for China’s new carrier. That report was also quickly taken down. Even state-run media outlets in China have hinted at this reality, and noted that the Chinese government has not denied.

Thus, it seems undeniable that China is pursuing at least one more aircraft carrier. The main questions remaining are when will it be completed  and how many will Beijing ultimately build?

Regarding the former question, both Ding and Liu denied various reports that said that China’s second aircraft carrier could begin testing as early as this year, citing the technical difficulties involved in building an aircraft carrier. Neither appears to have offered up any guesses as to when the new carrier would be launched.

Liu was equally evasive when asked how many carriers the PLA Navy would ultimately operate. According to the reports, he said that at a minimum China would need one to be at sea at all times, one to be in maintenance at all times and one to be used for training purposes. At the same time, he added: “I think if we need carriers, the more the better. The key is how much funding do we have.”

The new carrier would the first one that China built domestically, as the Liaoning is a Soviet-era carrier Beijing purchased from Ukraine.