Confirmed: China Is Building a Military Base Near Japan 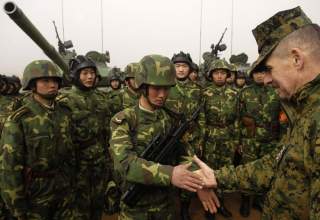 New satellite images have largely confirmed earlier reports that China is building a military base near the Senkaku/Diaoyu Islands that Japan also claims and administers.

Last week IHS Jane’s reported that satellite images from October 2014 show that China is building a heliport with 10 landing pads and wind turbines on Nanji Island, which is one of 52 islands on an archipelago that is part of Zhejiang province. Nanji Islands is only 300 km from the disputed Senkaku Islands. By contrast, Okinawa— which hosts major U.S. and Japanese military bases— are 400 km away from the disputed islands.

Japan’s Kyodo News, citing unidentified Chinese officials, first reported the military buildup late last month. According to that report, “Several large radar installations have been built at high points on the main Nanji Island. Several landing strips have been paved, likely for use by aircraft based on warships or patrol vessels, and more landing strips are set to be built on an island adjacent to Nanji Island from around next year.” The satellite data Jane’s reviewed found no evidence of any airstrips being built on the island, but it did say that “existing radar and communications sites are clear from the imagery.”

Following the publication of the initial Kyodo story, China's National Defense Ministry Spokesperson Yang Yujun dismissed the report as “pure media hype.” However, Yang also stated: “It's beyond any criticism and doubt when China carries out any activities and constructions on its own territory. Some media in Japan make irresponsible speculations about China's legitimate activities and construction and play up tensions in the region.”

Similarly, a senior researcher at the Chinese Naval Research Institute told Bloomberg that China’s military already has a small military presence on the island, which it is likely to expand. “It’s a strategically important location because of its proximity to the Diaoyu Islands.... It’s unarguable that China would like to enhance the existing military presence there.”

The new base will greatly strengthen China’s ability to conduct surveillance over the Senkaku Islands as well as the rest of the area it claimed as part of its East China Sea Air Defense Identification Zone (ADIZ) in November 2013.

The new base is also consistent with China’s recent moves in the South China Sea, where it is undertaking a massive reclamation project to establish several military bases near disputed islands in those waters. This includes an “unsinkable aircraft carrier” on Fiery Cross Reef in the Spratly Islands.

The new Nanji military base also highlights an uneasy dynamic in the East China Sea whereas the two sides continue to strengthen their military capabilities even as they repair their political relationship. For example, last April Japan announced plans to build a radar station on Yonaguni Island just 150 km from the Senkaku Islands. Japan (sometimes with the U.S.) has also been conducting a steady stream of military exercises to simulate defending or retaking remote island groups.