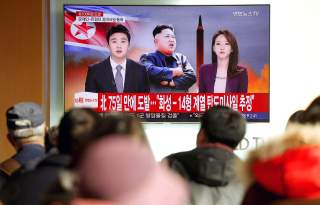 On November 28, North Korea tested a Hwasong-15 missile with sufficient range to hit targets on the East Coast of the United States, including Washington, DC. This follows an earlier test in July which demonstrated Pyongyang’s ability to strike targets on the West Coast of North America.

The U.S. mainland is currently defended by the Ground-based Midcourse Defense System (GMD), designed to hit fast, high-flying Intercontinental Ballistic Missiles (ICBMs) in between the launch and terminal descent phases. This is a feat commonly compared to striking a bullet with another bullet. Currently, the GMD has two batteries with forty-four missile interceptors in Fort Greely, Alaska, and Vandenberg, California. These provide defense coverage for the entire continental United States from both North Korea and Iran.

However, since 2012, Republican members on the House Armed Services Committee have pushed for a third GMD site on the East Coast, and appropriated $20 to $30 million dollars annually to study its feasibility.

An East Coast site with twenty interceptors is estimated to cost around $3.6 billion dollars to build and operate for five years. Increasing the number of interceptors to sixty would cost an additional $2.6 billion. Sites under consideration include Fort Drum, New York; Camp Ravenna, Ohio; and Fort Custer, Michigan. Republicans and Democrats in all three states have lobbied to host the installation, due to the lucrative construction contracts and local jobs that would follow. Bases in Maine and Vermont were also evaluated, but dropped from consideration by 2016.

However, from the beginning both the Pentagon and the Missile Defense Agency have shown little enthusiasm for an East Coast battery, claiming it is unnecessary. As it stands, the batteries on the West Coast already provide coverage of the entire continental United States. Nonetheless, proponents of an East Coast site in Congress and certain think tanks offer three main arguments for the third battery.

First of all, a third battery would provide deeper coverage—or “battlespace”—into the Atlantic, potentially allowing earlier interception of a hypothetical Iranian missile attack. However, Iran does not yet possess intermediate-range ballistic missiles that can hit targets across western Europe, let alone ICBMs that can traverse the Arctic or Atlantic Ocean.

A second argument is that a third GMD site would deepen the “magazine” of interceptors available to counter a nuclear attack. This is a valid concern: because GMD has demonstrated a hit rate of only a bit over 50 percent in tests, it is likely that four out of five interceptors would be fired to maximize the probability of destroying an individual incoming missile—and keep in mind that there are only forty-four currently deployed, and that North Korea has been apparently building new missile prototypes at a rapid pace. Indeed, in November 2017 the White House requested $2.1 billion to expand missile defenses, including for the purchase of twenty additional GBI interceptors and an additional launch site in Fort Greely.

But would there be additional benefits to stationing interceptors on the East Coast rather than simply adding them to preexisting sites at lower cost? Supporters argue that an East Coast battery would allow a second volley of interceptors to be fired using additional targeting data gleaned from the first shot—a capability known as “shoot-look-shoot.” A study by the Union of Concerned Scientists, which is critical of the East Coast site concept, concedes that “shoot-look-shoot” strategy could reduce the number of GMD interceptors required to achieve a high-probability of hitting, though it would not necessarily raise hit probability per se. Another paper argues that “shoot-look-shoot” defense would require four to nine more sites in order to be implemented correctly.

In any case, the Missile Defense Agency fears that building a third GMD site would divert money and resources from ensuring its interceptors hit the correct target in the first place. This is because GMD has been only tested under optimal conditions against easy-to-hit targets—and even then, it has only successfully hit targets under 60 percent of time.

Under realistic operational conditions, an incoming ballistic missile would likely deploy decoy countermeasures to confuse missile defenses as to which radar contact poses a genuine threat. However, GMD has only been tested a few times against primitive decoys, and its ability to differentiate between a missile and complex decoy remains in question. Furthermore, tests have been conducted with advanced warning and under ideal weather conditions, even though an actual attack could occur under less fortuitous circumstances.

Therefore, senior officials in the MDA argue that improving the missile interceptors is a greater priority than fielding more of them at present. Furthermore, a February 2017 Los Angeles Times article noted that the MDA had not even corrected flaws identified in early-model GMD interceptors that had led to interception failures in tests.

Another potential expansion to missile defense would be incorporating Canada into the GMD umbrella. This would allow Canadian radars to contribute targeting data to the system, as well as potentially including a GMD battery in Canada for additional polar coverage. While Ottawa rejected participating in the GMD program in 2005, in 2016 the Canadian defense minister put the possibility of joining the defense umbrella back on the table. The United States is not currently obligated to use the GMD system to defend Canada; however, Canadian opponents of GMD argue that Canada is currently under little threat of missile attack, and that joining might only increase the risk.

The Pentagon is supposed to announce the preferred location of a missile defense site it doesn’t want later this year—though there have been delays in the past—and it will be left to the White House whether to accede to congressional pressure. It’s worth bearing in mind that, regardless of what politicians on Capitol Hill may feel, the personnel in the military and MDA who operate America’s missile defenses seem to believe that improving the reliability of the trouble-prone GMD interceptors already in place would be a more efficient way of protecting the nation from missile attack.