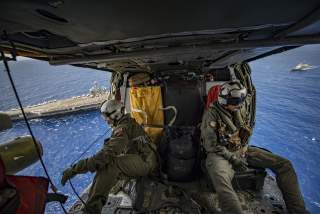 U.S. Senator Roger Wicker, R-Miss., and Congressman Rob Wittman, R-VA, have announced that they are putting forward new legislation that would codify the U.S. Navy’s requirement for 355 ships. The service currently has 276 ships in its battle fleet.

“They [the United States Navy] have come back to us with a new requirement based on the threat that we have and they have told us the requirement for the size of our Navy fleet is 355 ships,” Wicker told reporters during a press conference on June 22.

“We are introducing today the SHIPS [Securing the Homeland by Increasing our Power on the Seas] Act which would codify this requirement.”

Based on what Navy officials have told Wicker and Wittman, the two men decided to put together legislation to make it so that it is the policy of the United States government to field a minimum 355-ship fleet. The goal would be the build the fleet up to that level “as soon practicable,” Wicker said.

Wittman—chair of the House Armed Services Committee’s Seapower and Projection Forces subcommittee—noted that he too has strong bipartisan support for the SHIPS Act in the House of Representatives. Wittman pointed out that in addition to the Navy’s own evaluations, two independent studies have shown that the service needs more than 355 ships to meet its global commitments.

“You were to take the demand just from our combatant commanders across the world, the Navy should be north of 600 ships and should have 17 or more aircraft carriers as part of that,” Wittman said.

“The goal of a 355-ship Navy is a consensus strategy going back to 2015 when A Cooperative Strategy on 21st Century Seapower was jointly issued by the chiefs of the nation's sea services, and reinforced by the 2016 Force Structure Assessment and the February 2017 Accelerated Fleet Plan,” Courtney said in an email to The National Interest.

“Incorporating this goal in the 2017 NDAA is a logical next step and I fully support its enactment. I look forward to working in a bipartisan manner with Chairman Wittman and the rest of the Seapower and Projection Forces Subcommittee to make this important goal a reality."

Even if the SHIPS Act passes and is signed into law—and Congress appropriates the money—it will take at least 25 years to get to a 355 ship Navy. “In the best case scenario it’s in the next 20 to 25 years,” Wittman said.

“We want to be making sure we’re doing everything we can how to get there sooner.”

Wittman said that the Navy is looking at a number of options to make that happen—including keeping ships in service longer or bringing older, retired vessels back into service. But the Navy’s needs are increasingly urgent. As Wicker noted, the U.S. Navy faces serious threats that have emerged over the past decades in the form of a fast rising China, a resurgent Russia, Iran, North Korea and others.

“Suffice it to say we have a serious threat situation,” Wicker said.

Thus, the Navy needs all the ships it can get as quickly as possible. The Congress is doing what it can to help the service along. Indeed, the House Seapower and Projection Forces subcommittee has voted to increase the number of ships to be built in fiscal year 2018 to well above the levels requested by the administration.

“We received a 308-ship budget for a 355-ship Navy.  As I told Defense Secretary Mattis last week, we must do better than what we got in the budget, and I think that the measure we are proposing today is the first step in doing better by our Navy and our fleet,” Courtney said during the subcommittee markup on June 22.

“This mark recommends a total of 13 new ships in 2018 compared to the 8 that were outlined in the budget request submitted on May 23. This includes an additional DDG-51 destroyer, 2 Littoral Combat Ships, an expeditionary sea base, or ESB, and an additional LPD.”