Congress Needs to Require This Key Test on America's Supercarrier 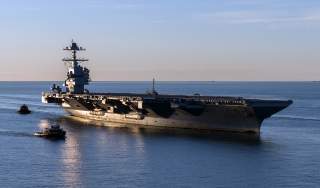 The Straus Military Reform Project and the Project On Government Oversight (POGO) sent a letter to the Senate and House Armed Services Committees urging members to strike language included in the a subcommittee mark for the 2018 National Defense Authorization Act that would strip the requirement for the Navy to conduct a critical test on the $13 billion Gerald R. Ford aircraft carrier. The provision would permit the Navy to delay full ship shock trials until the second ship in the class. Waiving this requirement for the Ford would endanger the lives of the 4,300 sailors of the ship’s complement and risk massive cost overruns in the years ahead as the Navy continues building what will continue to be an untested design.

As we have previously reported, full ship shock trials are critical tests designed to ensure each new ship class is suitable for combat. They occur when the fully kitted-out ship heads out to sea with its crew. Explosives are detonated underwater in relatively close proximity to the ship in order to learn if the ship’s systems are sufficiently hardened to carry out missions in the rigors of combat conditions, and if the crew would be able to rapidly identify and fix any problems that resulted during those conditions.

If the language stands and the Navy delays the tests, it would run the risk of sending the $13 billion Ford with 4,300 crew members into a situation where a single close-proximity explosion could render it useless and vulnerable to being sunk. Moreover, if the tests later reveal fundamental design problems when they are finally completed, the Navy would have to pay for an expensive retrofit of the Ford; the second-in-class ship, the USS John F. Kennedy; and the third-in-class ship, the USS Enterprise, which would be underway by the time the tests finally took place. The Navy’s previous attempts to wiggle out of this testing requirement was questioned by the Director of Operational Test and Evaluation, which disapproved the USS Ford’s Test and Evaluation Master Plan. The plan similarly didn’t sit well with the two senior members of the Senate Armed Services Committee. Senators John McCain (R-AZ) and Jack Reed (D-RI) both objected, saying that sending the ship out to sea before the tests “and potentially fighting without this testing” would deprive the Navy of information “to validate or improve” survivability, “thereby reducing the risk of injury to the crew and damage to or loss of a ship.”

In the end, Deputy Secretary of Defense Robert Work, under pressure from SASC, overruled the Navy and ordered the USS Ford to undergo shock trials, saying the tests “will be conducted to ensure the survivability of the CVN-78 [the Ford] design is understood prior to beginning operational deployments.”

These earlier statements makes this latest effort to bypass realistic combat testing all the more disturbing.

Dan Grazier is the Jack Shanahan Fellow at the Project On Government Oversight. Follow him @dan_grazier.

This article was originally posted on the Project for Government Oversight.