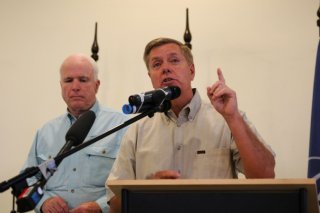 The whole purpose of a negotiation, as any able-bodied diplomat will tell you, is to get something from the other side without giving away too much in return. Diplomacy is difficult, not only because nations have their own interests and domestic political situations to deal with, but also because governments pitted against one another are oftentimes required to take a gamble in order to ensure that negotiations are successful. Sometimes, that gamble doesn’t pay off: a negotiation collapses, one side doesn’t meet its commitments and reneges on the agreement, or a development arises that makes the accord a relic of the past.

But there are examples when putting your personal reputation on the line can lead to unprecedented achievements. The nuclear negotiations with Iran, for all its bumps in the road, is an apt illustration of two nations recognizing that a thirty-five year history of mutual distrust should not impede a historic resolution on a critical matter of international security.

Many in Washington would say that this is a naive position to take. After all, the P5+1 talks with Iran on the latter’s nuclear program have been extended twice. U.S. and Iranian officials are hoping beyond all hope that a final framework agreement will be sketched out by late March—a timeline that is incredibly optimistic given the seemingly irreconcilable positions they hold on key issues. Tehran, for instance, has shown no willingness at all to downsize its centrifuges from the 10,000 or so it is currently operating to the 4,500 that western powers supposedly want. And, while the Iranians want a solution for the purpose of lifting an ironclad and debilitating global sanctions regime on their economy, Supreme Leader Ayatollah Ali Khamenei doesn’t completely trust that Washington will live up to its promises.

We are fourteen months into negotiations over a comprehensive solution, and less than three months away from another self-imposed deadline on a framework agreement that could prove to be the last one on the calendar. No one said talks would be easy, and there is absolutely no guarantees that a framework agreement will be reached by March or that a final agreement will be signed by this June. But with only five months left before the international community is able to definitively conclude one way or another about Tehran’s willingness to limit its nuclear program, it doesn’t seem particularly logical for the U.S. Congress to pass another round of economic sanctions. Deadlines are established for a reason: ensuring that negotiations don’t get bogged down in deliberate stalling tactics and maneuvering. If Congress wants to pass sanctions, it should wait until after the Obama administration’s June deadline passes (on Thursday, January 29, the Senate Banking Committee passed with a bipartisan 18-4 vote the Kirk-Menendez bill, which would tighten the screws on Iran’s economy if an agreement is not reached by June 30).

Many lawmakers in Congress obviously disagree. The Senate Banking Committee, the Senate Foreign Relations Committee, and the House Foreign Affairs Committee all have members who would like nothing more than to ratchet up the sanctions if the administration fails to strike an accord with the Iranians by their self-imposed March deadline. Indeed, if it weren’t for an unexpected decision by Sen. Menendez to withhold support for his own bill until late March, there was a good chance the Senate would’ve already passed the bill.

Senators Bob Corker and Lindsey Graham, two Republicans broadly viewed by their party as men who take national security policy seriously, are simultaneously attempting to pass a bill that would force the White House to acquire congressional approval before a P5+1-Iran nuclear deal is officially implemented. The Corker-Graham bill may have a better chance at passing with bipartisan majorities since it provides Democrats with an opportunity to look tough on Iran without opposing the White House on sanctions.

Congress, in other words, wants to be a central part of the discussion. Yet, what Congress doesn’t seem to understand is that the Commander-in-Chief—whoever that may be at any given time—is the sole elected official responsible for conducting U.S. foreign relations. Forcing the president to get congressional approval for an agreement is not an example of oversight, but rather a hindrance that will raise more questions among Iranians as to whether the White House can implement what it agrees to during negotiations.

The message to the U.S. Congress from the administration and from Western Iran experts is clear and unambiguous: let the process play out to the best of its ability, without any interruptions or speed-bumps that could torpedo one of the first major acts of diplomacy that the United States and Iran have had over the past thirty-five years.

If Congress wants to pass an additional sanctions package, it is certainly within their power to do so. But the very least the body can do is wait until late June, when Americans, Iranians, and the rest of the international community will be able to determine whether a permanent deal is achievable. Because, if an accord is not signed after two six-month extensions, there’s a compelling case to be made that the issues dividing the P5+1 and Iran may simply be irreconcilable.