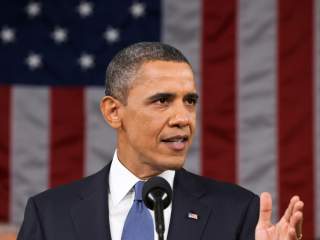 “The idea that a ‘strong man’ can save us isn’t true,” Sasse (R-NE), said. “What America needs is a constitutional recovery, not a Republican Barack Obama.”

If Sasse disappointed some members of the Republican Party, he didn’t shy from the task at hand at the summit hosted by Heritage Action for America, the lobbying arm of The Heritage Foundation.

Joined in the morning session by House Speaker Paul Ryan, Sen. Joni Ernst (R-IA), and Rep. Mark Walker (R-NC), Sasse called for a return to limited government, where government’s role isn’t so much “creating jobs” but creating a “nurturing environment” where jobs can be created.

Sasse mapped out the economic issues that conservatives plan to take on in the 2016 legislative year, which includes addressing why, according to The Heritage Foundation’s 2016 Index for Economic Freedom, “America’s economic freedom has been on a declining path over the past decade.”

“We should do some real hard soul-searching [about] why that is,” Sasse said.

He pointed to the growing costs of occupational licensing requirements, which he said burden the most vulnerable members of society.

“In D.C., if you want to trim someone’s hair or beard, licenses and permitting takes 2,000 hours. Guess who that hurts? That hurts the poor citizens in Washington, D.C.,” Sasse said, adding:

“The people who can afford to hire their lobbyist, they’ll be fine. But the poor—the ones who need economic freedom the most—they’ll suffer.”

Addressing this issue is just one of many regulatory reforms needed to “fix what is broken,” Sasse said.

The Nebraska Republican blamed many of the country’s economic challenges on bureaucracies like the Environmental Protection Agency, whose rules and regulations are unaccountable to voters through Congress.

“The rule of experts is insulated from democracy,” Sasse said, spurring applause from the conservative audience. “We believe in. . . the rule of law.”

To fix such problems, Sasse called on conservatives to look beyond Washington, a common theme throughout Heritage Action’s Conservative Policy Summit.

“Government is about securing freedom from lots of bad stuff in the world; government will never bring you freedom to [do anything],” he said. “That is your neighbor, that is your spouse.”

Kelsey Harkness is a news producer at the Daily Signal, where this article first appeared.