Is Cooperation between Moscow and Washington Possible after Sanctions? 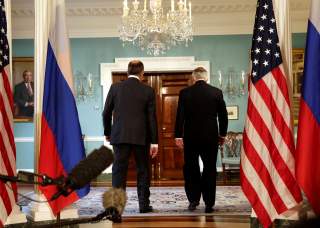 Is cooperation between Washington and Moscow still possible after the U.S. Congress imposed new sanctions on Russia and the Kremlin expelled 755 U.S. diplomats? Secretary of State Rex Tillerson seems to believe that the two great powers can cooperate even given the current circumstances. Analysts both in Russia and the United States agree that cooperation is still possible, but to a limited extent.

“We view the relationship from a very pragmatic point of view,” Tillerson told reporters in Manila on Aug 7. “And the fact that we want to work with them on areas that are of serious national security interest to us while at the same time having this extraordinary issue of mistrust that divides us, that’s just what we in the diplomatic part of our relationship are required to do.”

Given that Russia and the United States are the two largest nuclear powers on Earth, Washington cannot afford to simply cut off communications with Moscow over a single issue such as election interference in Tillerson’s view. “I don’t think it is useful to just cut everything off over one single issue,” Tillerson said. “I think, again, these are two very large countries, and we should find the places that we can work together. Let’s try to work together. The places we have our differences, we’re going to have to continue to find a way to address those.”

Tillerson said that the United States and Russia have to work together on issues such as Syria and Afghanistan where both nations have interests. “We have important national security interest in Afghanistan and that region of the world. And we have serious needs to begin to address the situation in Ukraine,” Tillerson said. “The Russians have indicated some willingness to begin to talk with us about a way forward on Ukraine. As you well know, we’ve appointed a special envoy to engage with Russia but also coordinating with all of the parties so that this is full visibility to all the parties, that we’re not trying to cut some kind of a deal on the side that excludes their interests in any way.”

The United States and Russia don’t necessarily have to agree on everything to cooperate or even work together. On some issues, it is necessary for Washington to engage the Kremlin and vice-versa. “Working together doesn’t mean that the two countries are in lockstep, or even coordinating policies—it means they continue to engage,” Olga Oliker, director of the Russia and Eurasia program at the Center for Strategic and International Studies (CSIS) told The National Interest. “Negotiation is working together. If the U.S. and Russia are to resolve any of these things we fundamentally disagree on, indeed, if either is to make real progress on their goals for those issues, some engagement will be critical. Moreover, if the U.S. and Russia don’t work together on, say, arms control, the whole arms control framework is in danger, and we’re all—the whole world—a good bit worse off.”

Russian analysts also believe that Moscow and the United States can cooperate in certain areas even with the current impasse. “I think that we must develop some niche areas to cooperate—in Syria, counter-terrorism, also in science, like space, and in certain areas of economy—just to keep the contacts alive,” Vasily Kashin, a senior fellow at the Center for Comprehensive European and International Studies at Moscow’s Higher School of Economics told The National Interest. “We must also avoid emotional moves, which might lead to irreversible changes in the Russian and American public opinion.”

In their recent meeting on Aug. 6 in the Philippines, Tillerson and Russian foreign minister Sergei Lavrov tried to focus on areas where cooperation might still be possible. “Looks like Tillerson and Lavrov tacitly agreed to leave U.S.-Russia systemic discrepancies outside the equation, recognizing that they are not going to be reconciled anytime soon,” Maxim Suchkov, a Moscow-based foreign policy analyst at the Russian International Affairs Council and editor of Al-Monitor’s Russia-Mideast coverage. “Yet, both will continue with the heated public rhetoric but will also seek opportunities for ‘targeted cooperation’—in Syria, North Korea, possibly Afghanistan.”

Indeed, in Suchkov’s estimation, a more pragmatic approach might turn out to be more productive than previous U.S.-Russia cooperation efforts. “This approach may eventually turn out more useful and of interest to both states given any idea of a grand deal is simply not on the table—even in theory—and Moscow has come to realize it,” Suchkov said. “Thus, lower expectation levels in Russia and the U.S. ironically enables the two states operate more freely vi-a-vis one another on a handful of international security issues that are of concern to both the U.S. and Russia.”

From Russia’s perspective, a pragmatic transactional relationship is exactly what the Kremlin wants from Washington. “For the Kremlin it would be an embodiment of the cooperation with the United States they have been seeking,” Suchkov said. “For the Trump administration, it may be an opportunity to turn the U.S. relationship with Russia into a form of a more targeted, two-man-channel format working on specific issues—such as the Ryabkov-Shannon mechanism or the Volker-Surkov contact group—or more confidential work such as what Russians and Americans are doing in Amman, Jordan.”

But looming in the background, however, is the ever-present Russian election interference investigation. “Moscow shouldn’t downplay the importance of the Russia probe in Washington these days which means any contact with Russians will be under the watchful eye of the Trump opponents in the city,” Suchkov noted.

Indeed, observers in Moscow are stunned by the internal chaos that seems to be gripping Washington. “The problem of working together for Russia and the U.S. now is that Russia has become one of the central issues of the U.S. internal politics,” Kashin said. “The U.S. is in the center of a very serious internal political crisis.”

Of particular concern to the Russian is that Trump administration appears to be at war with its own executive agencies. The idea that members of the president’s staff would leak information to the media is worrisome for observers in Moscow. “We, for example, see numerous leaks of the transcripts of Trump's phone talks with the foreign leaders. If such talks cannot be kept secure, is any safe diplomatic communication possible at all?” Kashin asked. “There is no single center for making decisions—no one to actually talk to. Any attempts to find new channels and contacts will lead to a disaster, it is like the Red Scare.”