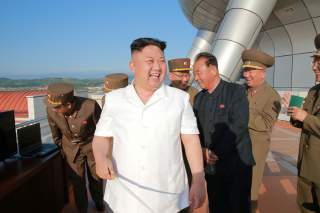 While the initial development of MOKV is aimed at configuring the “kill vehicle” for a GBI, there is early thinking about integrating the technology onto a Standard Missile-3, or SM-3, an interceptor missile also able to knock incoming ICBMs out of space. The SM-3 is also an exo-atmopheric "kill vehicle," meaning it can destroy short and intermediate range incoming targets; its "kill vehilce" has no explosives but rather uses kinetic energy to collide with and obliterate its target. The resulting impact is the equivalent to a 10-ton truck traveling at 600 mph, Raytheon statements said.

After the briefing, Tillerson, Mattis and Coats released a joint statement:

“Past efforts have failed to halt North Korea’s unlawful weapons programs and nuclear and ballistic missile tests,” the statement said. “With each provocation, North Korea jeopardizes stability in Northeast Asia and poses a growing threat to our allies and the U.S. homeland.”

The United States seeks stability and the peaceful denuclearization of the Korean Peninsula, the leaders said. “We remain open to negotiations towards that goal. However, we remain prepared to defend ourselves and our allies,” they added.

(This first appeared back in April.)

Although this language is not necessarily taken seriously as North Korea has made a habit out of making these kind of statements, Kim Jong-un is thought to be both unpredictable and potentially unstable. As a result, U.S. planners are not taking any chances when it comes to stepping-up missile defense technology and preparedness.

Lt. Gen. David L. Mann, former U.S. Army Space and Missile Defense Command told reporters last year that he did not know if North Korea’s claim about having successfully miniaturized a nuclear weapon is accurate, but did say their nuclear ambitions need to be taken seriously.

While many details about North Korea’s nuclear missile technology are likely not publically available, Mann may have likely been referring to the often-cited North Korea’s Taepodong 2 long-range missile. Various reports, such as one from the BBC, say this long-range weapon can hit ranges greater than 8,000 km – a distance which could put parts of the U.S. at risk from a North Korean attack.

Also, Mann may have been referring to another North Korean missile which has also been in the public eye. The North Korean KN-08 missile, mentioned last year by Commander of U.S. Northern Command Adm. William Gortney, can reach ranges greater than 3,400 miles, according to a recent report from the Associated Press.

At the same time, many analysts have said that it is not clear whether North Korea has the technology to accurately launch a nuclear-armed intercontinental ballistic missile able to successfully travel throughout all three phases of flight toward a target. An ICBM needs to travel through space carrying a warhead and then successfully re-enter the earth’s atmosphere before hitting its target.

A US Navy Carrier Strike Group is now heading toward waters near North Korea shores as the regime continues ballistic missile tests while threatening a nuclear strike against the US.

The USS Carl Vinson Strike Group, which includes destroyers, cruisers and a carrier air wing have changed course from a previously planned port visit to Australia and charted a northward course into the Western Pacific, Navy officials said.

The move will not only demonstrate a show of US force but also bring substantial military assets and power-projection ability closer to North Korean shores; F-18 Super Hornet attack fighters can launch from a carrier deck and destroy land targets from hundreds of miles off the coast.

In response to these developments, North Korean government officials reportedly gave a statement to CNN, saying "We will make the US fully accountable for the catastrophic consequences that may be brought about by its high-handed and outrageous acts."

With these threats as part of the equation, the Pentagon has sent the Terminal High Altitude Area Defense, or THAAD, to South Korea as a way to better protect against North Korean missile threats. THAAD, already placed in Guam by the U.S. military, is a terminal phase interceptor missile designed to knock incoming ICBMs out of the sky as they approach their target.

The Future of US Missile Defense - Multi-Object Kill Vehicle

“We will develop and test, by 2017, MOKV command and control strategies in both digital and hardware-in-the-Loop venues that will prove we can manage the engagements of many kill vehicles on many targets from a single interceptor. We will also invest in the communication architectures and guidance technology that support this game changing approach,” a Missile Defense Agency spokesman, told Scout Warrior last year.

If the seeker or guidance systems of a “kill vehicle” technology on a GBI cannot discern an actual nuclear-armed ICBM from a decoy – the dangerous missile is more likely to pass through and avoid being destroyed.  MOKV is being developed to address this threat scenario.