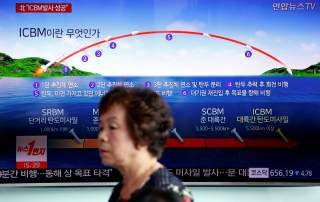 Would the United States be able to intercept a North Korean intercontinental ballistic missile (ICBM) launched at the American homeland? The answer is probably not.

“We have as much chance of intercepting a North Korean missile as the president does of scoring a hole in one,” arms control expert Joseph Cirincione, president of the Ploughshares Fund told The National Interest.

The U.S. national missile defense system—particularly the component designed to protect the American homeland itself—is not designed to defeat anything other than the most rudimentary of threats. Indeed, the weapon—called Ground-Based Midcourse Defense (GMD)—has an abysmal track record.

“The flight test record of the system is 10 for 18 and these tests have occurred under scripted and controlled conditions—meaning the realism of the tests is limited,” Kingston Reif, director for disarmament and threat reduction policy at the Arms Control Association told The National Interest.

“The system has only been tested once against an ICBM class target. Twenty of the 32 interceptors deployed in Alaska are armed with an older kill vehicle that has not had a successful test since 2008. The system has never been tested against ‘complex countermeasures’ that North Korea could develop to try to fool U.S. defenses.”

The GMD would only stand a chance of intercepting an incoming ICBM under the most idea circumstances.

“We could only hit a North Korean missile if the enemy cooperated,” Cirincione.

“They would have to launch a ‘limited’ attack. That is, only one or two missiles, no decoys, jammers or other countermeasures such as a tumbling warhead, don't blind our defenses by attacking the vulnerable forward deployed radars that detect and track the missiles. And do it during the day, as we have never tested our defenses at night. The last ICBM test was at night, by the way.”

“The U.S. system designed to defense the U.S. homeland against a limited ICBM attack from North Korea, known as the Ground-based Midcourse system, currently consists of 36 interceptors—32 in Alaska and four in California—and a network of supporting radars, sensors, and command and control,” Reif said.

“The number of deployed interceptors is slated to grow to 44 by the end of the year. Flight intercept testing of the system has not demonstrated that it is capable of reliably defense the U.S. homeland. The current ‘shot doctrine’ is to fire 4-5 interceptors at each incoming missiles and then...cross our fingers.”

If the North Koreans launched an ICBM that follows that exact game plan that the Pentagon has tested its missile defenses against, it could have a chance of shooting down the incoming weapon. But the reality is that the enemy rarely cooperates with one’s battle plans.

“This is why our commanders when assuring us that they can protect the United States almost always add the qualifying adjective ‘limited’ attack,” Cirincione said.

“This is what they mean. That the North Koreans don't do anything that we aren't expecting and that would overwhelm our crude defenses that have only been tested under ideal conditions and we can so only have a 50 percent success rate.”

Shorter-range theatre missile defense systems such as Lockheed Martin Terminal High Altitude Air Defenses (THAAD) and the U.S. Navy’s Aegis have a better track record. There is a chance that the United States could shoot down North Korean missile landing near Guam if Pyongyang makes good on its promise to test fire four ballistic missiles near the isolated U.S. territory in the Pacific.

“North Korea said it would launch four IRBMs against Guam. THAAD should have a shot, although it’s sort of at the edge of the system's capability,” Jeffrey Lewis, director of the East Asia Nonproliferation Program for the James Martin Center for Nonproliferation Studies at the Middlebury Institute of International Studies at Monterey told The National Interest.

“I'd probably put a couple of Aegis interceptors down there, not least because four targets at once might be stressful. This would be the first real world test of the system, so your guess is as good as mine. Against the continental U.S., the U.S. would use the GMD system in Alaska.  It's designed for this mission, but doesn't have a great track—unlike THAAD.”

Cirincione notes that during a real wartime scenario, THAAD would be facing against hundreds on incoming missiles—and it might not be effective in those scenarios.

“Basically, THAAD has never been tested against more than two targets. North Korea has hundreds of missiles,” Cirincione said.

“You think you can defend against that? How are you going to know which of any have nuclear warheads?  What about sabotage, cyber war, drones, attack on radar that blind the system?  Have we ever actually stressed our defense in realistic tests, where, say there was a Red Team actually trying to defeat the defenses? No, we have not. It's like testing a car you built only a controlled track at ten miles an hour and then racing it at LeMans.  The American public can have zero confidence in our ability to defend against a determined foe launching ballistic missiles.”

The bottom line is that if the United States is going to spend countless billions on missile defenses—especially when a real threat might exist—those systems had better work. Millions of American lives could depend on if these weapons actually work during real life wartime scenarios.

“If the United States is going to invest scores of billions in missile defense, then it should work as intended,” Reif said.

“Rushing to expand the existing GMD system is not a cost-effective strategy to stay ahead of the North Korean threat. Instead, the focus should be on improving the sensor/discrimination capabilities of the system and conditioning any decision on expansion on successful testing—under operationally realistic conditions—of the new, redesigned GMD kill vehicle that is under development.”

It is only a matter of time before North Korea has an operational ICBM combined with a working reentry vehicle and miniaturized nuclear warhead. Missile defenses will need to actually work under operational conditions; the stakes are too high.