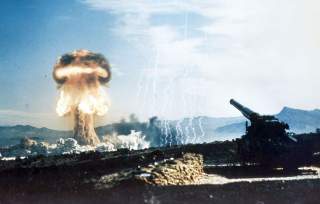 As Donald Trump’s first three weeks in office come to a close, critics are pointing out that his iconic slogan, “Make America Great Again” is starting to look more and more like an attempt to bring American society back to the 1950s. What most people haven’t realized yet is that his vision of turning back the clock also applies to America’s nuclear arsenal.

Just this past week, CQ Roll Call reported that a blue-ribbon Pentagon panel urged the Trump administration to make the U.S. arsenal more capable of fighting a “‘limited’ atomic war.”

According to the report, “The Defense Science Board … urges the president to consider altering existing and planned U.S. armaments to achieve a greater number of lower-yield weapons that could provide a ‘tailored nuclear option for limited use.’”

The strategy behind limited nuclear use sounds deceptively simple. You need to escalate a conflict just enough to end it.

As the theory goes, using low-yield nuclear weapons against an adversary’s conventional forces will demonstrate that you mean serious business and might be crazy enough to launch an all out nuclear attack. This will cause the enemy to “blink” and ultimately back down, rather than risk global thermonuclear war or continue conventional hostilities.

The reality is that planning to use nuclear weapons in a “limited” way is a dangerous fantasy. Even the Nixon administration paid lip service to the futility of the concept by referring to its plan for limited nuclear strikes against the Soviet Union as the “Madman Theory.”

But as the CQ Roll Call report points out, this “recommendation is more evolutionary than revolutionary.”

Limited nuclear warfighting is not a new concept. In fact, it is very well trod ground.

After the United States dropped the world’s first atomic bombs on Hiroshima and Nagasaki in 1945, a nuclear Pandora’s Box was opened, as nations raced to produce, advance and innovate their nuclear stockpiles. Most of these developments focused on the creation of building ever-longer range and more powerful “strategic” nuclear weapons.

These super-weapons, which could wipe out a civilization in a matter of minutes, gave birth to the concept of mutually assured destruction and created the precarious state of nuclear deterrence that exists between nuclear powers to this day.

But during the opening stages of the Cold War, nuclear weapons weren’t built for strategic deterrence, but instead were tailored for large-scale warfighting. Much like the iconic Sherman tank or AK-47 assault rifle, nuclear weapons in the ’50s were designed and built to go toe to toe with the enemy.

A wide array of weapons like unguided air-to-air rockets, land mines, artillery shells, depth charges and bazookas entered into service — even if their mission could be fulfilled by tried and tested conventional weapons with less of a penchant for fallout, collateral damage or escalation to a full-on nuclear war.

Most of these weapons were phased out by the 1990s, but the United States still maintains 180 tactical nuclear bombs in Europe, to be carried by NATO fighters in the unlikely outbreak of open hostilities with the Russians.

While they have fortunately never been used in combat, we know from wargames carried out by several different administrations, that the concept of a limited nuclear exchange is a pipe dream.

In 1955’s Carte Blanche wargame, more than 300 simulated tactical nuclear weapons were launched at Soviet targets on German soil with the aim of halting an advancing Soviet army.

An estimated 1.7 million Germans were killed, with 3.5 million more wounded, and incalculable additional casualties resulting from radiological fallout. When the results of the exercise were leaked to the press, they “produced widespread unrest and agitation” in West Germany over America’s nuclear employment strategy.

It is unlikely that “small” nuclear weapons will ever return to this level of strategic importance in the U.S. war plan. But even the use of a single low-yield weapon can cause unimaginable casualties and lasting nuclear fallout.

As the CQ Roll Call report rightly points out, “expanding the inventory of lower-yield warheads … could trigger a cycle of response from adversaries, possibly making nuclear conflict more likely … the U.S. military would need to present the president with options for using these weapons in a crisis, and those options may prove attractive … because the president might believe he could use these weapons without necessarily starting a global nuclear war.”

That belief is a fantasy. The real problem with this proposal is that any use of nuclear weapon, limited or not, could lead to escalation.

In fact, the Reagan administration launched a wargame in 1983 to test the Madman Theory and analyze the viability of U.S. nuclear warfighting plans. Codenamed Proud Prophet, the exercise had NATO launch limited nuclear strikes against Soviet targets in response to conventional provocation. But instead of backing down, the Soviet team doubled down, launching a massive nuclear counterattack at the United States, to which the U.S. responded in kind.

When the dust settled half a billion people had been annihilated. NATO was gone. The results were reportedly such a shock to Reagan that his schedule had to be cleared for the rest of the day. The blowback was swift.

According to Department of Defense adviser Paul Bracken, “many of the strategic concepts proposed to deal with the Soviet Union were revealed to be either irresponsible or totally incompatible with current U.S. capabilities and immediately thrown out.”

A few months later, Reagan famously told the American people that, “A nuclear war cannot be won and must never be fought.”

Even if you believe that tactical nukes offer a strategic advantage, the 180 “dial-a-yield” B61s stationed in Europe already provide this capability. But these missions can also be carried out by conventional U.S. forces, such as the powerful JASSM-ER cruise missile, without the risk of full-on nuclear escalation.

In the words of senator Dianne Feinstein, “There’s one role — and only one role — for nuclear weapons, and that’s deterrence. We cannot, must not, will not ever countenance their actual use. There’s no such thing as limited nuclear war, and for the Pentagon’s advisory board to even suggest such a thing is deeply troubling.”

We have played this game before and it did not end well. We don’t need a 1950s nuclear arsenal in 2017. We don’t see anyone buying black and white television sets.

Let’s leave the more “usable” nukes in the dustbins of history too.

Geoff Wilson is a Policy Associate at Ploughshares Fund, where he focuses on U.S. nuclear and military strategy. Will Saetren is the author of Ghosts of the Cold War: Rethinking the Need for a New Cruise Missile, and is an alumnus of the Roger L. Hale Fellowship at Ploughshares Fund.