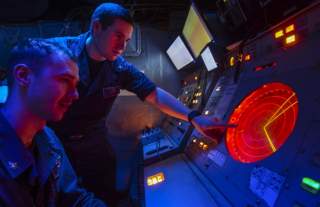 As the conflict in Ukraine continues to evolve, it’s time to reflect on what tactics were successful in the early Crimea campaign. One event in particular should serve as a wakeup call for US naval strategists. In March, pro-Russian forces sunk two ships in the narrow channel that connects Ukraine’s Southern Naval Base to the Black Sea. With the entrance blocked, several Ukrainian ships were trapped in Donuzlav Bay.

American ships are not adequately prepared for this tactic, and would have been hard-pressed to escape the bay. In the open sea, US Navy ships are powerful actors, protecting sea-lanes and projecting American power abroad. Near shore, however, their advantage is lost and they are vulnerable to asymmetric attacks. The US Navy must put more resources into preparing for and countering this sort of unconventional threat.

The tactic was startlingly simple. Early in the morning of March 6, pro-Russian forces intentionally sank the decommissioned Russian cruiser Ochakov in the navigation channel separating Donuzlav Bay from the Black Sea; one day later, they scuttled a second, smaller ship. The sunken Ochakov easily blocked the narrow, shallow waterway—lying on its side on the seabed, 50 percent of its hull was exposed above water.

With the channel blocked, the Ukrainian ships were trapped and all but defenseless: all six were eventually boarded and taken over. The minesweeper Cherkasy heroically struggled to the end and its final efforts to free itself provide additional insight.

The Cherkasy attempted to affix its stern towline to the bow of the smaller sunken vessel. Presumably, the captain sought to pull it out of the channel and open an escape route. His challenge was that the Cherkasy’s tow system, like those on the majority of US Navy vessels, is designed to tow afloat vessels – not the waterlogged ships blocking his escape. The Cherkasy was unable to move the sunken vessel and after a few hours of circling in the harbor, its captain negotiated his ship’s surrender.

Russian Special Forces are assumed to have carried out the Ukrainian operation, but there is nothing inherently difficult in scuttling a ship to block a channel. Most well trained irregular soldiers have the capacity to carry out such an operation: they could simply hijack a commercial ship and sink it to blockade US ships in port. Currently, there is no way to quickly extricate a sunken ship, leaving trapped warships bottled up and assailable.

This low-tech tactic should serve as a reminder to US defense planners that, despite advances in naval systems, modern Navy ships are still remarkably vulnerable when in port or operating near shore. As the US Navy continues to expand its global reach, it is increasingly being asked to visit riskier ports of call including destinations like Abidjan and Lagos. Both ports are accessed via a narrow channel, and neither the Nigerian nor the Ivorian government can boast full control of its territory or waterways; the Nigerian military’s recent feebleness in countering Boko Haram is only the latest reminder of this reality.

Despite the impending withdrawal of US combat troops from Afghanistan, non-state actors will continue to be a primary threat to both US interests abroad the American homeland. Ongoing operations and training against terrorist and insurgent groups in places such as Colombia, Yemen, and the Philippines underscore this reality. And while US ground forces have been the face of recent campaigns, the Navy also confronts non-state threats. This is hardly a new phenomenon, given that the first major 21st century terrorist attack against US forces was a strike against the USS Cole, a Navy warship.

The Department of Defense needs to put a greater emphasis on protecting US naval assets against asymmetric tactics. The first step is to fund Navy schools where innovative counter-tactics can be developed. The Surface Warfare Development Group was once home to this sort of thought leadership, but in 2011, the school’s budget was allowed to lapse and it closed. The Navy is now touting a new “Top Gun” program for its surface ships that will open this year, but budget gaps like this must not be allowed. Schools are cheaper than even a single warship, and their value in delivering new thinking to the Fleet is disproportionate to their low cost.

The second step is to create a high-level strategy and gaming group to think about current weaknesses and solutions in regards to the non-state threat to US naval assets. This group should include not only surface warfare strategists, but also terrorism and insurgency experts. Potential solutions could include everything from tactical countermeasures, to pre-positioned engineering assets in theater, to specialized training of local security forces.

The US continues to field the most dominant Navy in the world. Its power projection capabilities will be especially important as US strategic interests dictate that American ships show the flag in increasingly far-flung corners of the world – from small islands in the South China Sea to coastal Sub-Saharan Africa. However, if the United States is to rely more heavily on the Navy, it must also invest in initiatives to keep American ships and sailors safe. Just as America’s adversaries can be expected to learn from low-tech tactics in Ukraine, so too must the US Navy.

Luke Tarbi is a former Navy officer and member of the Carnegie Council for Ethics in International Affairs and U.S. Naval Institute. David L. Knoll is a Fellow at the Truman National Security Project and a Ph.D. Candidate at The Fletcher School for Law and Diplomacy at Tufts University.