Could This Be America's Best Kept Economic Secret? 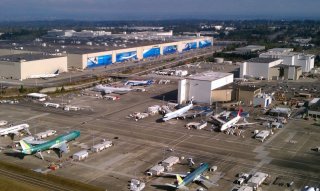 The U.S. economic recovery and current strength reflect in large part advanced industries. As other sectors faltered, both employment and output in these businesses grew. In 2013, they employed 12.3 million workers (9 percent of the U.S. workforce), who made on average $90,000 (compared to the U.S. mean of $51,500). These industries generated $2.7 trillion in output (17 percent of U.S. GDP), and indirectly supported an additional 14.3 million jobs.

Central to this classification, as developed in a recent Brookings report, is innovation. Participants stand out on two criteria—over 20 percent of their workers are science, technology, engineering, or math (STEM) professionals and all spend $450 or more in R&D per worker. The authors classify some fifty different industries—from aerospace to semiconductors, satellite telecommunications to software publishers—across manufacturing, energy, and services as advanced sectors.

These companies—think Boeing, Sirius Satellite Radio, and Google among the thousands of lesser known names—cluster in cities. 70 percent of their jobs are in the 100 largest metropolitan areas. Here they can link to local universities, benefit from a skilled pool of labor, and learn from other nearby firms.

Spillovers from this sector help support the broader local economy. Advanced industry supply chains purchase on average $236,000 in goods and services per worker from other businesses (compared to $67,000 in other industries). And the higher salaries and profits feed back through greater tax intakes.

Nationally these industries help maintain the U.S. competitive edge—they account for 90 percent of private-sector R&D and 85 percent of all U.S. patents. And they dominate exports, producing 60 cents of every dollar of products sent abroad.

Still, when measured against other countries, U.S. advanced industries are losing ground. Jobs and output as a share of GDP are down. This has potential knock on effects for innovation, given the dominance of these businesses in R&D spending, and for future long term economic competitiveness and growth.

As with so many other economic challenges today, better education matters. The United States ranks 23rd among developed countries in terms of annual STEM graduates per capita, behind South Korea, Portugal, and Poland. As a result, U.S. advanced industry employers often struggle to find qualified workers. The authors recommend the United States expand early education, improve the quality of schools, and encourage more students to study STEM areas to diminish the deficit.

Foreign policy issues too can make a difference, especially with regards to U.S. neighbors. According to the CFR-sponsored Independent Task Force report, North America: Time for a New Focus, stronger ties enhance the United States’ ability to compete in a dynamic and competitive world economy. Export data shows that of the over $1 trillion in advanced manufacturing industries exports (which doesn’t include energy and services), roughly one third head to Canada and Mexico. This number rises to more than half for motor vehicle, railroad, and computer parts. This back and forth between the three nations in the actual manufacturing process reflects a deepening of regional supply chains and the important, if often overlooked, role U.S. neighbors play in supporting “domestic” advanced industries. As Washington debates broader trade, immigration, and security issues, the economic ramifications of these policy choices for our most dynamic industries shouldn’t be forgotten.