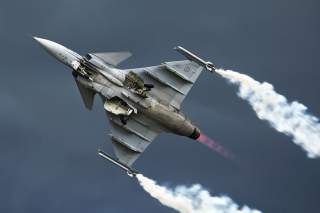 Philippine President Rodrigo Duterte’s anti-American outbursts have made US businesses in the country increasingly worried about their future. For Swedish companies, the outlook seems quite different.
In early November, a business delegation led by Sweden’s Minister of Enterprise and Innovation Mikael Damberg will arrive to coincide with the opening of the country’s new embassy in the capital Manila.
At the same time, defence contractor Saab Group is opening a new office in Manila and is reportedly in pole position to secure a deal to sell its JAS 39 Gripen fighter aircraft to the Philippine Air Force. Trade promoter Business Sweden may also open a new office in the country.

During a visit to Beijing this week, Duterte said it was “time to say goodbye” to the US and that military exercises between the two countries should end. If that wasn’t clear enough, Duterte has previously told US President Barack Obama to “go to hell.” An anti-American demonstration outside the US embassy ended violently on Wednesday with dozens of people arrested and many injured.

Ebb Hinchliffe, head of the American Chamber of Commerce of the Philippines, told Reuters that Duterte’s statements have unnerved American businesses. US trade delegations in technology, financial services and manufacturing have canceled trips in recent weeks, he said. At least two American companies have chosen to do business in Vietnam instead “because of the president’s anti-American sentiment.”

“Every time he opens his mouth and says something negative about America, that hurts me personally… and from a business standpoint, it’s not helping,” he said in the Reuters interview.

Guenter Taus, the head of the European Chamber of Commerce in the Philippines, also raised concerns, saying “uncertainty is a factor that we do not like in business, and that is exactly what we’re experiencing right now because we don’t know where we are heading.” The credit-rating agency S&P Global said that stability and predictability of policy making in the Philippines has diminished under the new presidency.”

In contrast, Joona Selin, Executive Director or the Nordic Chamber of Commerce in Manila, said its member companies remain optimistic. “There has been a lot of headwind lately, but from a business and economic perspective, the Philippine story hasn’t changed. All positive fundamentals in the economy are in place.”

The country’s GDP growth accelerated to seven percent in the second quarter from 6.8 percent in the first, making it one of the region’s fastest growing economies. “We remain bullish,” Selin said.

Still, Duterte’s defense of his bloodstained anti-drug campaign – with some 3,500 people killed in alleged extra-judicial executions in just three months – has created unease in several Western countries. That includes Sweden as the country opposes the death penalty, regardless if it’s in the Philippines, China or the US.

Sweden strongly rejects the executions taking place in the Philippines, Damberg said in an interview in Singapore last month.

“We believe that trade and exchange with countries is essential for the development of human rights. But we are not naive. We know that some countries violate human rights,” he said in an interview.

“Perhaps it’s even more important to have an embassy in countries where there are challenges. Our increased presence in the region makes it easier for us to support Swedish companies to do right.”