Could This Be the U.S. Military's Secret Weapon to Stop a 'Swarm' Strike? 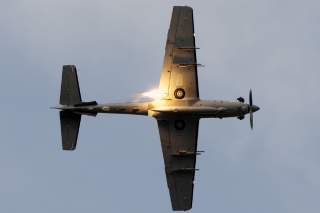 Last week’s massed attempted drone strike against Russian forces in Syria is a harbinger of things to come. Indeed, it is almost inevitable that American forces could come under similar attack. However, countering drones with surface-to-air missiles or interceptor aircraft is expensive, thus an airplane such as Embraer and Sierra Nevada’s A-29 Super Tucano might be a more cost effective option.

“The A-29 does have an air-to-air kill against drug runners so it can certainly be used very effectively against that class of target,” Taco Gilbert, Sierra Nevada’s senior vice president for intelligence, surveillance and reconnaissance (ISR) told reporters on Jan. 16. “It has the ability to go slow like a slow-mover aircraft.”

Gilbert noted that during the last stages of the Second World War, piston-engine Spitfire fighters were very effective at intercepting the German V-1, the world’s first cruise missile. Indeed, once the Spitfire pilots learned more about the threat, they often would not even bother to shoot the target, but would fly alongside and tip the missile over with the wings of their fighters. Today’s pilots could apply the same principle to intercepting incoming drones. “When you look at a similar class weapon today, a slow-moving cruise missile or a slow-moving drone, this is a very effective aircraft in that type of environment,” Gilbert said.

Moreover, even if weapons had to be employed, the A-29 is armed with highly accurate .50 caliber machine guns that could quickly dispatch those threats. “It’s one of those things where you want to be efficient and effective and the A-29 is both,” Gilbert said.

The threat from swarming drone attack is here to stay.

“Looking at non-state actor drone operations in the last 2-3 years, I would expect to see more efforts to launch swarm drone attacks by non-state groups in the future,” David Knoll, an analyst at the Center for Naval Analyses told The National Interest.

“As with the improvised explosive device (IED) fight during the Iraq war, we’re seeing a cat and mouse game between the non-state groups employing drones and the states attempting to counter them. The key difference is that with drones, the commercial sector is driving the rapid development of drone technology. The non-state actors only have to modify the platforms—in many cases not at all—and figure out how to employ them effectively in a military setting.”

Samuel Bendett, another specialist researching drone technology at the Center for Naval Analyses, agreed that swarming drone attack and coordinated drone launches—such as the one that hit Russian forces—will become increasingly common. The best defense against such attacks is likely electronic warfare (EW).

However, rather than using a platform such as a A-29 in a kinetic role against UAV swarm, a better use might be to use such an aircraft as a carrier-vehicle for an electronic warfare package.

“Any platform can be outfitted with enough sensors to either track or engage and destroy an incoming UAV of a certain type- after all, the Russians have already mounted an EW system on a small Orlan-10 UAV,” Bendett said. “So using a Leer-3 system as an example—it’s a cellular signal jammer that operates on an Orlan-10 UAV—other technologies can be developed that can be mounted on other airborne platforms.”

Thus, if the United States Air Force acquires a platform like the A-29 or AT-6, it might be able to use such an aircraft as a defense against swarms of drones in lieu of a $1.8 million AIM-120D AMRAAM launched from a F-22 Raptor or F-15C Eagle. Certainly, from a cost perspective, it would make sense.