Could China Help Pakistan Make Its Nuclear Arsenal Even Deadlier? 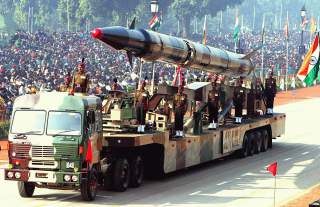 Last week, Chinese officials confirmed the sale of a sophisticated optical tracking system to Pakistan. The nation has been developing multiwarhead nuclear missiles, and the infusion of advanced Chinese tech brings it one step closer.

Optical systems are critical in missile testing, providing engineers valuable high-resolution images of a missile’s multiple stages that can be used to improve designs.

The sale marks the first time China has sold such sensitive technology to a foreign country, and comes after India successfully tested a powerful long-range ballistic missile in January. The missile, the Agni-V, has a range of over 5,000 km putting all of China within nuclear striking distance as well as parts of Europe and Africa.

India’s arsenal is already capable of hitting targets across Pakistan, as the two nations have long been locked in a nuclear arms race. In 1998, India and Pakistan tested their first nuclear bombs within one day of one another, and have since sought to outpace the other’s missile development and nuclear technology.

Though India’s missiles are capable of carrying larger payloads and flying further, Pakistan’s MIRVs would allow it to overwhelm India’s missile defense system and hit several targets with a fewer number of missiles.

India has yet to develop the technology for a multiwarhead missile, and there are fears that Pakistan’s MIRV technology could shift the balance between Pakistan and India.

Analysts believe Pakistan’s MIRV technology has yet to be perfected, but the latest acquisition of a Chinese optical system will significantly aid development.

In missile testing, optical systems consist of specialized telescopes equipped with a high-speed camera, infrared detector, laser ranger, and a tracking system that captures and follows targets. With this system, missile designers are able to view high-resolution images from each stage of the missile including launch, separation, re-entry and the release of warheads.

The Chinese system that Pakistan acquired is unique for its four telescope units. Each unit is placed at a different location to capture highly detailed and accurate images from multiple angles. With multiple warheads, the additional telescopes allow the system to more easily track each warhead simultaneously.

“Seeing it with our own eyes is completely different from mining dry data. It helps to not only diagnose problems, but also generate inspiration,” Rong told the South China Morning Post.

A Chinese team spent three months in Pakistan assembling the system and training locals on how to use it.

In 2017, Pakistan bolstered its air defenses by spending $373 million on Chinese anti-air missiles to ward off Indian jets.

Both nations have had a tense relationship with India, which has resulted in several armed conflicts over the past seven decades.

For two months last summer, Chinese and Indian troops faced off on a remote plateau in the Himalayas. The region sits along a disputed border between the two countries, and tensions rapidly mounted before both sides eventually reached an agreement.