Could France, Germany and Poland Build a New Lethal Tank Together? 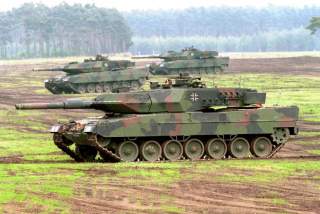 For Defense News yesterday, Aaron Mehta, Pierre Tran and Jaroslaw Adamowski report how the Polish Army is edging closer to getting new tanks. During an interview back on 22 July, Polish Defense Minister Antoni Macierewicz told the reporters that his ministry was keen on closer military-industrial ties with other European countries. Specifically, his people were “talking about producing and manufacturing a new tank in cooperation with Germany and with France as another example of this cooperation.” Back in February, Deputy Defense Minister Bartosz Kownacki similarly told Defense News about a bilateral deal with the Czech Republic to develop and build new armored troop carriers. This latest decision may additionally disappointing to those who wanted a wholly Polish armored vehicle, but it’s a sensible and manageable stratagem for the important task of recapitalizing the Polish Army’s fleet.

In 2014, our Lund Fellow Steve Grundman delivered an address at the British Embassy in Washington on our research into the importance of “Innovation Before Scale”—a view, we explained, on how to build a better business model for transnational armaments cooperation. Sophisticated weapons can be expensive to develop, but spreading the costs amongst too many sponsors leads to inefficient decisions in requirements setting and suppliers selection, from development through production. In 2015, I leveraged this work in delivering an address at the British Embassy in Warsaw, for an audience of Polish Army officers and defense industrialists, on “Architecting Poland’s New Tank Project”. As I wrote back then, the Russian T-14 already looked menacing, and Poland’s military situation on the ground was

“complicated by the age of its tank fleet. Its German-built Leopard 2A4s are refurbished, second-hand machines from the Bundeswehr, and its locally-built PT-91s were developed from [leftover] T-72s in the mid-1990s. The rest of the fleet are actually original T-72s much like the Russian machines. To the rear, the alliance offers only so much help. No wholly new tanks have been built in any NATO country since GIAT (now Nexter) built its last Leclerc in 2007. The US Army has thousands of excess M1 Abrams available for sale—even if the service has recently recommitted to the program—but their sustainment costs are remarkably high. Poland’s military modernization program intends to spend over $4 billion (US) annually for the next ten years—a meaningful but hardly vast sum. Thus, the Defense Ministry has launched a project with armaments developer OBRUM to develop a new tank, the PL-01, to affordably meet the Polish Army’s needs.”

At the time, the previous Polish government was toying with the idea of developing a tank entirely on Polish resources, and entirely at home. Four billion dollars may sound like a lot, but that money must also pay for new fighter jets, helicopters, submarines, missiles, and many other things. Some quick research we undertook at the time indicated that just developing a new armored vehicle—without producing more than prototypes—has in recent history been an enterprise consuming at least several hundred million dollars. Our table here (where the piece first appeared) lists some recent examples.

More recently, Steve and I have been updating our research, but we find that our findings hold. Adding the Czechs here and the French and Germans there adds only modest complications. The Polish defense industry has a great deal to contribute to any project, but sharing the burden of funding with a few key allies makes good financial, political, industrial, and managerial sense.

James Hasik is a senior fellow at the Brent Scowcroft Center on International Security, where this first appeared (link is above).