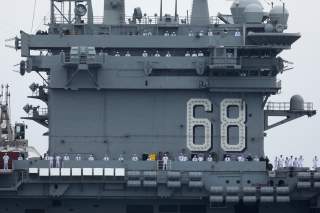 The United States and Iran have been on bad terms—occasionally spilling into open hostility—since the Iranian Revolution of 1979. One instrument of American policy and prestige in the Middle East region are the aircraft carriers of the U.S. Navy. The Iranian government is well known to despise these offshore platforms of American power, and that leads us to this question: if the two sides came to blows, does Iran have the firepower to sink an American carrier?

Experts and outside observers believe that Iran has given considerable thought to vanquishing an American aircraft carrier. In January 2015, Adm. Ali Fadavi of Iran’s Islamic Revolutionary Guards Corps Navy claimed his force was capable of sinking American aircraft carriers in the event of war. One month later, during the Noble Prophet 9 exercises conducted in the Straits of Hormuz, Iran constructed a mock aircraft carrier and proceeded to attack it. The attack was carried out with antiship missiles, mines and a simulated commando raid, which involved troops landing on the flight deck via helicopter and attacking the carrier’s superstructure.

According to the Office of Naval Intelligence, Iranian naval forces are split between two organizations, the Islamic Republic of Iran Navy (IRIN) and the Islamic Revolutionary Guard Corps Navy (IRGCN). The former is a more traditional navy with a more traditional role of guarding Iranian naval interests and projecting power in the outer Persian Gulf and Indian Ocean regions, with larger frigate-sized warships. The IRGCN, on the other hand, focuses more on smaller, fast-moving, heavily armed ships for an antiaccess, area-denial role in the inner Persian Gulf against Iran’s neighbors and the United States. The IRGCN also controls Iran’s shore-based antiship missiles.

There are many reasons to be skeptical about Admiral Fadavi’s claim. The first is that Iranian forces have a range problem. U.S. forces, particularly those on aircraft carriers, have a much greater operational range than Iranian forces. The longest-range Iranian coastal defense missile, the Ghader antiship cruise missile, has a range of 186 miles—less than half that of a F/A-18E/F Super Hornet. The same goes for Iranian air power, where Iranian warplanes and their weapons are outranged by American defenses. Major U.S. warships such as aircraft carriers can stay well out of range of Iranian forces and operate with impunity.

The second Iranian problem is a firepower problem. Although Iran has scores of ships armed with antiship missiles, few if any have a warhead powerful enough to seriously damage an American carrier. The Chinese C-802 antiship cruise missile, from which Iranian antiship missiles are derived, has a warhead weighing just under four hundred pounds. During the Cold War, the Soviet Navy and Air Forces designed for the anticarrier role typically had a warhead size of 1,600 to 2,200 pounds. Most Soviet missiles designed for the anticarrier role, such as the AS-4 Kitchen, were optionally armed with nuclear warheads, which speaks volumes about how difficult the Soviets thought it would be to reliably sink a carrier. Fortunately, Iran does not have nuclear weapons.

The third problem is an opportunity problem. Even if Iran were to somehow acquire the resources to sink a carrier, the United States could simply avoid it and choose another means of attack. The United States will never place an aircraft carrier with 5,500 American servicemen and servicewomen within range of an enemy force at risk unless there was little to no alternative—and the Pentagon has plenty of alternatives to a carrier’s firepower, including cruise missiles launched from warships and long-range strategic bombers.

The fourth problem is the overwhelming superiority of U.S. forces in the defense. U.S. aircraft carriers are typically escorted by one Ticonderoga-class guided missile cruiser and one or two Arleigh Burke–class guided missile destroyers, all of which have the Aegis combat system. These ships were specifically designed for protecting aircraft carriers against mass air and missile attacks. Combat air patrols flown by F/A-18E/F Super Hornets will be able to take out aircraft and warships at long ranges. Finally, Phalanx close-in Gatling guns, five-inch, twenty-five-millimeter and .50 caliber guns scattered throughout a carrier strike group can make short work of any drones, helicopters, or fast attack boats that somehow make it through the carrier’s wall of air power.

A fifth and final problem? The overwhelming superiority of U.S. forces in the offense. Any campaign against Iran would almost certainly see the United States striking first, and striking hard against any and all Iranian ships and aircraft that are a threat to American forces. Naval bases, air bases, air defenses, IRIN and IRGCN ships at sea, port facilities, antiship missile batteries and bases would all come under attack from land- and carrier-based aircraft, long-distance bombers operating from bases such as Diego Garcia, and ships and submarines firing cruise missiles. Iranian naval forces would suffer heavy attrition from the strikes, which would be unrelenting until intelligence indicated they were no longer a threat. Iran’s naval forces might very well be unable to cobble together a meaningful counterattack force from the survivors of such a devastating campaign.

All of that having been said, there are bright spots in the Iranian arsenal. Taking a cue from China and its DF-21D antiship ballistic missiles (ASBMs), Iran recently claimed to have tested ASBMs of its own. The radar-guided Hormuz 1 and 2 antiship ballistic missiles have allegedly hit targets at ranges of up to 155 miles. While that’s not far enough to outrange an aircraft carrier, the Iranians are on the right track. Another substantial threat are the three Kilo-class diesel-electric attack submarines purchased from Russia in the early 1990s. Built for shallow water and coastal operations, the Kilo class are theoretically highly capable submarines. The Iranian boats, according to the authoritative Combat Fleets of the World, suffered from battery problems, poor training and inadequate maintenance. Still, properly crewed and equipped, the submarines and their torpedoes could inflict great damage on an aircraft carrier.

Image: Sailors man the rails as aircraft carrier USS Nimitz with Carrier Strike Group 11, and some 7,500 sailors and airmen depart for a 6 month deployment in the Western Pacific from San Diego, California, U.S., June 5, 2017. REUTERS/Mike Blake​