Could Iran's Air Force Take on America in a War? 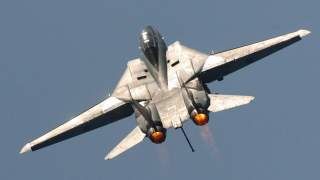 Once one of the largest and most powerful air forces in the world the Islamic Republic of Iran Air Force (IRIAF) is a mere shadow of its former self. War and decades of crippling sanctions have reduced Iran’s once proud air force to a motley international collection of aging warplanes of questionable value. The long decline of Iranian air power means the country is only minimally capable of securing its own airspace and incapable of standing up to regional rivals, let alone the United States.

The Shah of Iran, installed by a CIA-backed coup in 1953, was a reliable and trusty American ally. The United States saw Iran as a linchpin of its Cold War effort in the Middle East; like Japan or Australia, a powerful regional military ally upon which it could build an pro-West, anti-Communist alliance.

This powerful air force meant to serve America’s interests abruptly fell into the hands of a revolutionary government in 1979, when the Shah was deposed and the Ayatollah Khomeini took power. The new theocratic government initiated a purge of the military to root out pro-Shah or assumed to be pro-Shah officers, and Iranian military readiness—particularly in the air force—sagged. The 1980 invasion of Iran by Saddam Hussein’s caught Iran dangerously unprepared.

Iran’s high-tech air force—and the recall of pilots and technical personnel dismissed by the new government—saved Iran from losing air superiority to Iraq. Iranian and Iraqi fighters tangled in the skies above their countries an estimated 1,000 times and total losses on both sides amounted to hundreds of aircraft. Still, the chaos and poor leadership of the new regime ensured Iran never dominated the skies during the war to the extent it could have. The new regime, having made the United States the “Great Satan,” faced a spare parts and equipment embargo that further constrained the IRIAF’s ability to fight at its maximum potential.

By 1993, five years after the end of the Iran-Iraq War, the Islamic Republic of Iran Air Force was down to just 15,000 personnel; a quarter of its strength in 1976. Only sixty of the 225 F-4 Phantom IIs and sixty of the 179 F-5 fighters were still in service, the rest either shot down, grounded or cannibalized for spare parts. The F-14 fleet fared much better, with sixty of the original eighty Tomcats still operational. Only twenty of the original C-130 Hercules transports remained. In 1990 the regime received twenty Su-24 Fencer strike aircraft and thirty MiG-29 “Fulcrum” fighters from the USSR. Other new stock included twenty-five Chinese Chengdu F-7 fighters—copies of the MiG-21—but together these purchases were hardly enough to make up wartime losses. The IRIAF also absorbed a small number of Iraqi Air Force aircraft that fled the country during the Persian Gulf War and took refuge in Iran.

Tehran’s hostility to the West and its nuclear program continued to make it a pariah state under sanction. According to Flight International, the backbone of the IRIAF is still the same as it ever was: forty-two F-4 Phantom IIs, twenty-four F-5 fighters (including the indigenously built Saegheh derivative), twenty MiG-29s, seventeen F-7 fighters, twenty-three Su-24 Fencers (including some ex-Iraqi Air Force Fencers) and nine ex-Iraqi Mirage F-1 fighters. The Iranian Revolutionary Guard Corps Air Force, a separate air arm and part of the Iranian Revolutionary Guard Corps, flies ten ex-Iraqi Su-25 “Frogfoot” fighters, a low-level ground attack aircraft originally designed as the Soviet answer to the A-10 Thunderbolt II.

Despite its increasing age, Iran’s air force has been deployed numerous times in the war against ISIS. Iranian F-14 Tomcats have provided escort to Russian Air Force bombers, striking targets in Syria, and Iranian F-5 Tigers, F-4 Phantoms and Su-24 Fencers have also flown interdiction strikes against the Islamic State. These fighters are anywhere from thirty to fifty years old and would be quickly shot down in conflict with a country with modern armed forces. The air fleet’s age may be showing: four Iranian warplanes crashed in 2016, including an F-4, J-7, Su-24 and MiG-29.

Iran has attempted to start up a domestic military aviation industry, with largely disappointing results. In 2007 Iran introduced the Saegheh fighter, a twin vertical stabilizer version of the F-5 Tiger which was touted in the Iranian press as “more difficult to pick up on the radar systems compared with the normal version due to its higher maneuverability”—an odd statement since maneuverability and stealth have nothing to do with one another. In 2013, Iran introduced a prototype of the Qaher-313 “stealth fighter” that appeared so small that the pilot’s knees were visible in the cockpit. A new version unveiled in 2017 appeared larger but many still harbored lingering doubts about the airworthiness of the design.

The end of the Iranian nuclear program has not completely lifted the global arms embargo on Iran. A 2010 ban on conventional weapons transfers to the country can be circumvented provided the arms purchase is approved by the UN Security Council. The ban expires in 2020. Iranian-Russian talks on the sale and coproduction of forty-eight Su-30 fighter bombers once thought promising, have stalled, likely on issues of price and technology transfers. Iran will almost certainly demand the transfer of key technologies in case of future arms embargoes.

After decades of neglect, the IRIAF is clearly hanging on by a thread. Whether or not the country can modernize its air force depends in large part on its acceptance of UN demands regarding its nuclear program. Even then, Iran’s hostility to its Middle Eastern neighbors, the West and Israel will prompt many arms sellers—with the possible exception of Russia—to avoid dealings with the country. Only a rapprochement with its sworn enemies will revive Iran’s air force—and there’s no sign that will happen any time soon.