Could North Korea Attack America with an EMP Weapon? 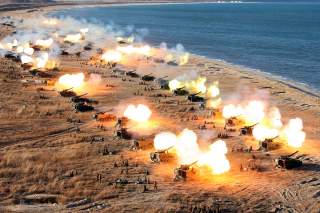 North Korea’s launch of a Hwasong-12 IRBM over Japan on 28 August, a second launch on 15 September (once again overflying Japan), and its test of what is either a boosted fission weapon or an early generation thermonuclear weapon on 3 September have accelerated the rush towards a major military crisis on the Korean peninsula. One aspect of North Korea’s nuclear developments that warrants closer attention is its ability to use nuclear weapons to generate electromagnetic pulse (EMP) attacks, or threaten low-Earth orbiting satellites in space.

EMP isn’t new; we’ve known about it since the Cold War, as a result of high-altitude nuclear testing such as the ‘Starfish Prime’ test in 1962. The effects of that test on terrestrial electrical systems generated concerns that the Soviet Union could blanket the US or NATO with sufficient EMP to burn out critical command and control networks and disrupt Washington’s nuclear retaliatory capability in the opening stages of a nuclear first strike. Such an attack would have had an even more devastating effect on non-hardened civilian infrastructure.

Earlier this year, North Korea’s testing of ICBMs included trajectories lofted to very high altitudes, which allowed Pyongyang to test warhead re-entry survivability, and minimized the risk of US military retaliation. The tests also demonstrated North Korea’s ability to detonate a nuclear weapon at high altitudes to generate EMP. Carrying out such an attack wouldn’t require accurate guidance, or high-yield warheads that are capable of surviving the heat of atmospheric re-entry, or even ICBMs.

A 2008 EMP Commission report (PDF) found that exo-atmospheric detonations of nuclear weapons would directly affect critical civilian infrastructure, most notably for power generation, telecommunications and data networks, as well as robotic industrial and manufacturing infrastructure. Analysis in June of this year on 38 North suggests that North Korea is already well placed to cause substantial damage to unprotected civilian networks using such attacks. That would hold true against the US, as well as its allies such as Japan and South Korea, or even Australia.

Evidence given by Peter Vincent Pry to the 2004 EMP Commission suggested that (PDF, p. 5) North Korea, with Russian assistance, was developing a ‘super-EMP’ weapon designed to affect a broad range of electronic systems. Such a weapon could be delivered by a missile, or it could be deployed in a satellite in a manner similar to the Soviet-era Fractional Orbital Bombardment System (FOBS).

If North Korea could detonate a nuclear weapon in space, it could also undertake a ‘Van Allen’ attack that would be designed to excite and expand the lower Van Allen radiation belt around Earth, exposing up to 803 satellites in LEO to high levels of radiation. US Defense Threat Reduction Agency analysis in 2010 suggested that satellites in LEO, which are not hardened against radiation found in higher orbits, would be vulnerable to nuclear detonations that ‘pumped’ the intensity of the Van Allen belts. Weeks or months of cumulative damage generated by passing through the zones of radiation would cause those satellites to fail. A Van Allen attack is highly indiscriminate: any satellite passing through the excited lower belt would be damaged. US satellites would be just as defenceless as those belonging to China, Russia or other states.

Certainly satellites could be replaced, but it would take years to completely restore the lost capability. The requirement to wait until Van Allen belts returned to normal levels of radiation, limited launch capability, long production queues, and the high cost for new satellites would slow the process down. If a combined Van Allen and EMP attack was effectively carried out, the ability to re-establish space systems could be at risk if satellite production facilities were damaged. In the interim, global economic systems would fall apart as the vital communications links for stock markets collapsed.

The Trump administration is maintaining that ‘all options are on the table’ for dealing with North Korea’s growing nuclear threat. The prospects for war on the peninsula are bad enough, with massed North Korean artillery attacks on Seoul a leading concern as well as the prospect of a general North Korean offensive into South Korea. The risk of a war escalating across the nuclear threshold raises the spectre of the first use of nuclear weapons in anger since Nagasaki—against South Korea, Japan or US territory—and the possibility that Pyongyang could devastate its opponents’ economies with EMP and destroy vital space infrastructure with Van Allen attacks. In any war, North Korea would certainly face defeat and, with it, the end of Kim Jong-un’s regime. In confronting his fate, Kim Jong-un would have everything to gain and little to lose by employing such a devastating tactic.

Malcolm Davis is a senior analyst at ASPI, where this first appeared.