Could North Korea Launch a 'Pearl Harbor' Attack on Hawaii? 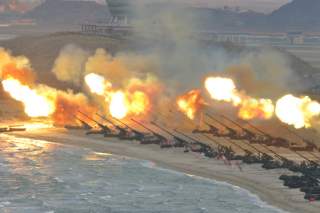 The Democratic People’s Republic of Korea’s (DPRK) efforts to develop long-range ballistic missiles and nuclear warheads are accelerating.  Pyongyang already has or will soon possess ballistic missiles capable of threatening virtually any target in the Western Pacific region. As if that were not enough to cause U.S. defense planners sleepless nights, the latest Worldwide Threat Assessment by the Director of National Intelligence believes that 2017 will be the year that North Korea tests an intercontinental ballistic missile (ICBM), a weapon with sufficient range to deliver a nuclear weapon to Hawaii, Alaska and the continental U.S.

There have already been more North Korean missile tests this year than in any previous one.  While not all have been successful, a recent Washington Post article makes clear that these tests show the increased sophistication of Pyongyang’s missile designs, the improved reliability of key components and the continual progress toward development of a true ICBM.

On May 13, North Korea fired an intermediate-range ballistic missile on an unusual trajectory, lofting it more than 2,000 km above the Earth. Pyongyang claimed that this showed the missile’s capacity to carry a heavy nuclear warhead, the kind that North Korea may already be capable of building.

(This first appeared in May)

The most recent test, on May 21, may have been the second of a canisterized, road-mobile, solid fuel, medium-range missile. Such a system is particularly dangerous because it can be deployed and made ready to fire in a very short period of time with few warning signs.

Last month, the North demonstrated the ability to do simultaneous launches, firing four medium-range missiles at one time. Western analysts believe that the DPRK may have been practicing a barrage attack on South Korea, U.S. and Japanese defense positions.

While the DPRK has conducted only five underground nuclear tests, here too there is evidence of progress. Pyongyang claimed that the last test was of a warhead small enough to be delivered by a long-range ballistic missile. Published reports suggest that North Korea is making steady progress towards precisely this type of device. Preparations are well underway for a sixth nuclear weapon test, although international pressure may have caused the timing of the event to be delayed.

What would North Korea do with its ICBMs? The above cited Washington Post article speculates that Pyongyang’s targets might include both military centers such as U.S. Pacific Command headquarters and the air and naval facilities on Oahu, Hawaii or U.S. strategic forces bases such as Barksdale, Alabama, Offutt, Nebraska and Whiteman, Missouri.

This list suggests a targeting strategy that was known during the Cold War as “counterforce.” Such an approach would need to be executed early in a confrontation or conflict, before the U.S. and its allies were able to attack the DPRK’s nuclear forces and command and control. It is possible that North Korea might seek instead or in addition to target major U.S. urban centers including Seattle, San Francisco, Los Angeles and Honolulu.

Protecting the homeland, including Alaska and Hawaii, is dependent on a ballistic missile defense system that consists of an array of space, ground and sea-based sensors, ground and, to a lesser extent, sea-based interceptors and a sophisticated battle management and command and control system. The heart of this capability is the Ground-based Midcourse Defense (GMD) consisting of radars, some in Japan but primarily in Alaska, and a set of Ground-Based Interceptors (GBIs) deployed at Fort Greeley, Alaska and Vandenberg Air Force Base, California.

The current homeland missile defense architecture is probably sufficient to defend Alaska and the lower 48 states from North Korean ICBMs. The outlier is Hawaii, which as we know from North Korean sources, is a potential target. There are two reasons for this. The first is the long-distance between Hawaii and the GBI sites in Alaska and California. This puts Hawaii on the edge of the engagement envelope for the GBIs. The second reason is the lack of adequate radar coverage of ballistic missiles launched against Hawaii.

The Missile Defense Agency recognizes this problem and is proposing to deploy a massive new radar somewhere in the Hawaiian Islands in the middle of the next decade. Even with this new radar, the GMD will only get one shot at any incoming ICBM. Compared to the other 49 states, Hawaii is underdefended.

Fortunately, there is a relatively quick and cheap solution to this problem, one that has been proposed by several organizations and individuals interested in ballistic missile defense of the homeland. It consists of turning the Aegis Ashore test installation at the Pacific Missile Range Facility (PMRF) into an operational missile defense site.

The PMRF Aegis Ashore installation is a working duplicate of the one operational in Romania and the one that will be soon be deployed in Poland. The only piece of hardware required is an AN/TPY-2 radar like those now deployed in Japan.  Thus, the system could be made operational in just a few years, ahead of the North Korean ICBM threat. As newer interceptors are brought online, such as the Standard Missile-3 Block IIA, and better radars are developed for the Aegis and GMD systems, they could be added to the installation in Hawaii.

Those responsible for the defense of the Homeland and Hawaii, in particular, know that this is the right solution. In testimony just last April before the House Armed Services Committee, the head of U.S. Pacific Command, Admiral Harry Harris, responded to a question regarding the ability of the current missile defense system to defeat threats targeting Hawaii thusly: “I think that we would be better served, my personal opinion is that we would be better served with a defensive Hawaii radar and interceptors in Hawaii. I know that is being discussed.”