Could Russian or Chinese Submarines 'Sink' the U.S. Navy in a War? 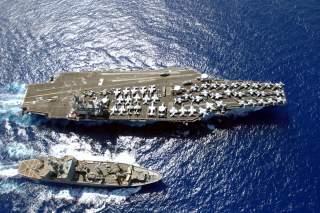 While the U.S. Navy has been sounding the alarm about a resurgent Russian and growing Chinese submarine threat, much of the problem stems the service’s much diminished anti-submarine warfare (ASW) capabilities. Even the combined might of today’s Russian and Chinese submarine fleet does not come close to matching the capabilities or threat posed by the once-mighty Soviet Navy—which boasted roughly 240 submarines before the 1991 collapse of the Soviet Union.

During the late Cold War-era, Soviet designers and a number of Western analysts believed that the Soviet Union was starting to pull ahead of American designs in terms of acoustical stealth—according to a recent Center for Strategic and International Studies (CSIS) report titled Undersea Warfare in Northern Europe. But Russian technological progress came to a virtual standstill in the aftermath of the Soviet collapse. Nonetheless, since 1991, while Moscow has tried to push forward with late Soviet-era innovations, the social, economic and political upheaval of the 1990s essentially resulted in a lost decade for the Russian submarine force as funding slowed to a trickle.

“The Russians have continued to move forward with a series of technological improvements that emerged at the end of the Soviet Union but the new Russia was unable to capitalize on due to a small budget,” said retired U.S. Navy Capt. Jerry Hendrix, director of the Defense Strategies and Assessments Program at the Center for a New American Security. “However, the United States and its alliance partners, distracted by wars in Iraq and Afghanistan, have allowed their ASW abilities to atrophy.”

As the CSIS report notes, the present day Russian Federation Navy has about 56 submarines in total—which is roughly one-fifth of the size of the Soviet undersea force. Moreover, as CNA Corporation research scientist Mike Kofman has noted, at best, half of Russia’s submarine fleet is operational at any one time. One example cited in the CSIS study is the Russian Northern Fleet, which nominally operates 42 submarines but only 22 to perhaps 31 are operational vessels. “One of the most puzzling things you’ll ever hear is when people say the Russian submarines are operating at Cold War levels,” Kofman told The National Interest. “That's frankly impossible.  How can one-fifth the submarine force of the Soviet Union, with barely 50 percent operational readiness - and I think that's very generous - could be operating at a level of activity of what was the largest submarine force in the world?”

Meanwhile, on the other side of the world, the Chinese People’s Liberation Army Navy (PLAN) has more than 70 submarines and is rapidly expanding. However, the quality of Chinese submarines lags behind qualitatively compared to American or Russian boats—though Hendrix has contended that the newest Type 093B and forthcoming Type 095 submarines offer acoustical performance comparable to the U.S. Navy’s Improved Los Angeles-class boats. The Chinese have “at least 70, and they’re building,” Vice Adm. Joseph Mulloy, the U.S. Navy’s deputy chief of naval operations for integration of capabilities and resources told the House Armed Services Committee’s seapower and projection forces subcommittee on February 25.  “You get back into the whole quality versus quantity issue, but at the same time the Russians are also building...and they build much higher-end submarines.”

While the submarine threat the U.S. Navy faces has been growing since the post-Cold War lull of the 1990s, the real problem is the service’s atrophied ASW capabilities and much-truncated attack submarine force. The U.S. Navy—which has roughly 52 attack submarines with a stated requirement for 48 boats—is on track to have 41 attack boats by 2029. Service leaders acknowledge that the 48 boat requirement is set too low and are currently studying options to boost that figure. However, the Navy has few options to boost the number of submarines in its fleet. “We reach a minimum of about 40 to 41 in the late ‘20s, early ‘30s before we start climbing back up out of that,” Rear Adm. Michael Jabaley, the Navy’s program executive officer for submarines told an audience at CSIS on July 8. “This is not something we can we fix at this point—it’s the result of decisions made long ago.”

But with Russia and China increasing their underwater activities, the Navy is feeling the pressure due to its atrophied capacity for ASW. “Both China and Russia are content right now to be regional powers, so although they may have a smaller submarine force or a less capable submarine force, they can complicate the United States Navy's operational plans quite a bit because we are a global power that spends most of our time forward deployed out and about the 19 maritime regions of the world where we have defined national interests,” Hendrix said. “All Russia or China has to do is put a few of their submarines into the waters where our ships are operating, from our Littoral Combat Ships up to our supercarriers, and we notice.”

But it’s not just the sea-going carrier strike groups or surface action groups that are out of practice, the Navy’s shore-based sub-hunting maritime patrol aircraft don’t have enough experience built up in their community to face off against the resurgent submarine threat. “Additionally, the Maritime Patrol Community has not really built up the time in their new P-8 Poseidons to be confident of their skills in a full out ASW prosecution,” Hendrix said. “We need some big ASW exercises against quiet boats, and we need a lot of them.”

Thus, while the Russian fleet is a recovering force that is once again showing clear signs of life, it is a mere shadow of its Cold War-era Soviet predecessor. Meanwhile, the PLAN submarine force is large, but it is relatively technologically backward and has some ways to go before it can truly compete in the big leagues with the United States and Russia. The problem for the United States and NATO is less the revival of the Russian fleet (or the growth of the Chinese fleet) and more the lack of Western anti-submarine warfare (ASW) capacity.  “It is our own cuts in ASW that make this more of an issue than it otherwise would be,” Kofman said.